Catch up to Ibiza

The irony of our meal in the Real Club in Alicante was that the starters of thin sliced scallop and the best squid ever were great but the much anticipated snails and rabbit paella was awful. The rabbit was all bone and the snails were so small they resisted extraction with the tools (fork) to hand and a frustrated shell crush really didn’t help matters. 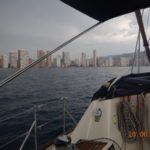 On then to our next port which we debated as progress was engine driven again and we wanted to optimise the passage to Ibiza. Reading my 20 year old pilot book but also consulting the excellent ‘Captains Mate’ app from the Cruising Association, we chose Moraira as we wanted to watch the England vs Belgium World Cup game and it seemed the right sort of place. Our selection proved to be inspired with an alongside berth and a very good 3 course meal in front of the telly for 15 Euros. The only downside was bad reports of water quality but with only two of us on board and 500 litres in the tanks, we chose to avoid any potential contamination and press on.

Our passage to Ibiza was memorable because WE SAILED all be it only some of the way but the silence and motion was invigorating. To secure a berth in San Antonio we had phoned to put our name on a waiting list at 9am and only found we had been successfully allocated a berth when back in signal range – I am still paranoid about turning the satellite system on after the horrendous charges. Dave had never been to Ibiza and the Clubbing Capital of the Mediterranean certainly ticked his box although we were both asleep by 10pm, sleeping through the heavy beat pulsing across the harbour.

We were now planning our cruising stops to optimise our arrival in Barcelona and we decided on a short passage to an anchorage on the northern coast of Ibiza. The anchorage was rather crowded (as they tend to be in the Ballearics) and we dropped in 17metres depth expecting a wind shift overnight. To avoid shearing about which the Southerly tends to do with its high topsides and coachroof, we rigged our steadying sail which kept us straight and prevented troubling our American neighbours on one side and Swiss on the other.

I decided it would be a good idea to take a look at the undersides and the fouling situation having fitted an ultrasonic system before our departure. I was only immersed long enough to see that the prop anode was missing when I was stung by a jelly fish. It was about the size of a small coffee cup and had black/purple spots. I have since identified it as Pelagia noctiluca and it is quite common apparently. It was bloody painful and the rash turned to blisters and then scabs.  So, the prop anode was missing and needed replacing so, with uncertainty whether we would anchor again and not relishing a dive in Barcelona harbour, I had to ‘get back on the horse’ and using the (brilliant although I say it myself) diving system, replace the anode which thankfully only involved three allen key screws which I wound up as tight as I could.

Yes, Ibiza was attractive from the sea but clearly set up for people at least 40 years younger who want to sleep most of the day and listen to bass heavy music all night. We had a good  (and healthy) meal on board and turned in early(ish). This strategy clearly paid dividends the next day when we were the perkiest people consuming a cooked breakfast (full English) at 09.30.  Our laundry was picked up at 9am and returned at 11.30 and although I appear to be down one sock it was both reasonably priced and an effective way of getting our Skivvies and T Shirts restored to wearable state. All in all I quite liked what I saw of Ibiza.

We then marched on under motor and sail to a delightful anchorage in Ibiza where I was surprised and mystified by the deployment of the NUBA (Nick Underwater Breathing Apparatus) which employed parts of the deck wash system, as well as a snorkel and air pump. Nick is very proud of this. Jacques Cousteau will be turning in his grave. However fairs fair as it was effective and the anode was attached.

During the underwater prep for “Operation Anode” Nick was stung by the smallest jellyfish in the Mediterranean – possibly in the world. He screamed out and appeared over the transom with two welts on his shoulder and back. Kept screaming. Pussy. The marks were about three inches long and had swelled up like a blister. Fortunately I was on hand and stepped in quickly and efficiently to tell him to pull himself together and stop crying like a baby. I was then able to administer some specialist anti jelly sting cream (that’s what I told him anyway) and he calmed down and has quarantined himself in his cabin – so that’s an upside to the whole episode then……