There is quite a lot to tell so this is an ‘intermediate’ blog whilst enjoying a summer of visits to the Algarve coast.

Lagos proved to be something of a gem with excellent facilities, charming (if a little touristy) old town, an excellent chandler and superb beach. Following a brief trip back to ‘Blighty’ I returned with Paula, Ollie and his girlfriend Gini. Gini, seen here with Ollie after exploring ashore in Alvor, is not new to sailing and was a welcome addition to the crew. 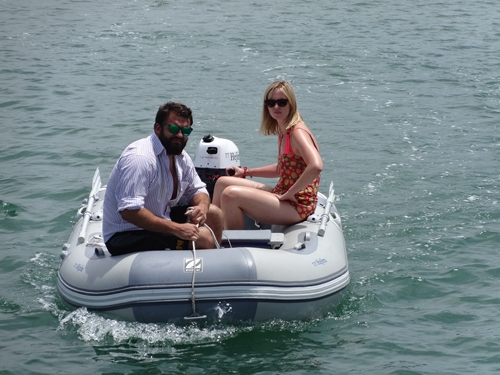 We discovered the benefits of pre-arranged Airport transfers which were cheaper and more convenient than just jumping into a taxi. We also noted that in sailing west to the anchorages near Cape St. Vincente, the wind is generally much stronger and colder as the predominant northerlies have not had the benefit of warming over the land. However the comparative seclusion is worth the effort and the sail back with three reefs and staysail didn’t upset the crew so early in their stay. 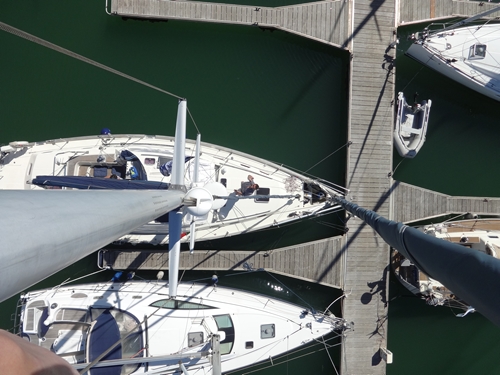 The trip up the mast to replace the anemometer unit was rewarded by a fully functioning wind display but the replacement Air Breeze was a little more problematic. I had chosen to replace the whole thing as I did not want my planned ocean passages compromised by a faulty unit. Unfortunately, even when the blown fuse had been replaced, the unit continued to ‘crash stop’ regularly with the diagnosis suggesting fully charged (definitely not) batteries. This situation was marginally improved by adjusting the cut out setting (not recommended in the literature) and this gained more consistent charging. Reluctant to adjust excessively, I asked for advice from Barden, the supplier of this and the original unit as well as the 5 replacement AGM batteries and solar panels but despite my patronage they could offer no coherent explanation and I think I will just have to monitor the situation and continue to scratch my head and wince at the expense.

A replacement engine oil pressure sender helped to rectify the low readings and a number of other improvements and additions will make life on Hejira more comfortable in the future.

During my family cruise from Lagos and subsequent ‘chaps’ cruise with Ollie’s mates, we explored the Algarve coast along and into Spain experiencing ‘the good the bad and the ugly’. We enjoyed several anchorages with a real ‘Southerly’ experience in delightful Alvor and the vast but attractive lagoon at Faro/Olhao. 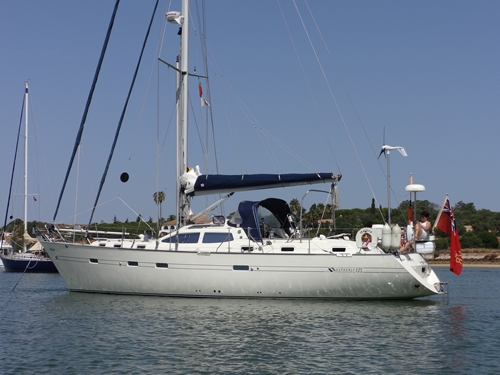 The visit to the island of Culatra, enclosing the Lagoon was quite an experience as it has a real 1950’s feel to it with no cars and tiny dwellings housing the small time fishing community, you almost expect to turn a corner and bump into Ernest Hemmingway! 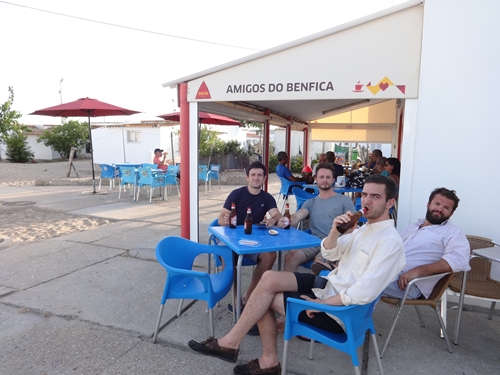 While with the ‘lads’, we anchored off a beach within the Faro lagoon and, with attendance in case of a problem, I tried my new ‘patent’ diving gear for the first time. The idea is just to enable access to the underside of the yacht for extended periods to carry out tasks which would otherwise require a dry out or lift to address. The ‘equipment’ (too grand a name for it!) comprises a Hozelock pond aerator pump, filter, lengths of hose and an adapted snorkel with an air vent at the bottom of the tube. We found that, so long as care is taken not to ‘pinch’ the tube, I could swim underneath (I checked the rubber strip on the keel aperture) and I spent 20 minutes with a scouring pad on the propeller. During this time Ollie repeatedly checked I was OK as to have someone disappear like this for the first time is a little un-nerving. The only problem was that, after twenty minutes totally immersed, I was extremely cold once back on deck. Just goes to show that even in the summer, I should have worn the wet suit. 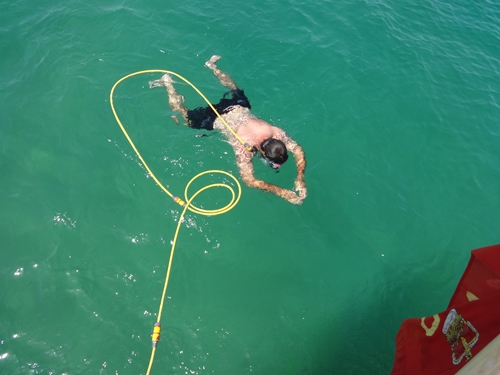 The usual fun and games punctuated the lulls in the wind and I think the lads all left having had another memorable sailing experience. 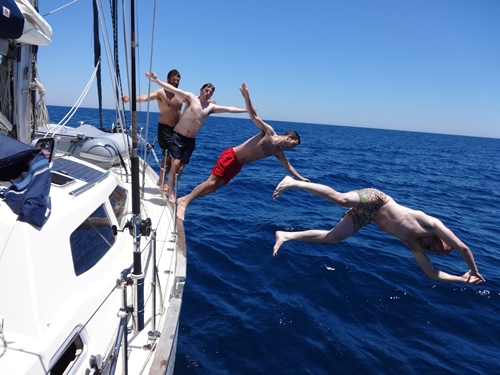 In Albufeira I met Simon and Jenny on Fenicia who were also going trans-Atlantic this winter and enjoyed a meal with them while the lads were doing what lads do. As always when talking ‘bilge’ (as Paula calls it) and looking over the idiosyncrasies of others yachts and their preparation, I picked up some ideas and contacts. As a result, I have taken their recommendation of a rigger in Vilamoura and I have embarked on the replacement of all the standing rigging and this is extensive and substantial on a Southerly 135. The rigger to his credit said that the insurance precaution of downgrading the rig cover for rigs over 10 years old (Hejira’s is 11) was un-justified  in that the 135 has a grossly over specified rig and suggested I ask if an inspection would suffice. I did ask but having already commissioned an inspection before I left Blighty which did not impress the insurers, I took the decision to replace the standing rigging, assisted by the favourable Sterling/Euro exchange rate. The insurers did relent in that they allowed the Selden bottle screw to be re-used. So I have taken the opportunity to have the furling gear serviced, two fold out steps added to the top of the mast to help with access to the equipment at the very top and insulators added to one of the back stays (so it can act as an aerial) for the possible future addition of SSB. I have also incorporated a slick, easily rigged gybe preventer which will be a real boon on the trade wind passages.

Having also seen the security measures taken on Fenicia, I have designed and commissioned ‘de-mountable’ security bars for the two large hatches so that they can be safely left open when away and overnight. These will slide into a compact, narrow space for easy stowage when not in use and they will lock using the same ‘keyed alike’ padlocks which are used on all the locks throughout the yacht. A consideration was also the speed of opening in the event of a fire but, we can only do what we can do.

Having installed a very comprehensive Vetus gas detection system, it involved modifications to the pipework in the gas locker to incorporate a solenoid shut off valve and I had a by-pass installed in case of failure of the solenoid valve. I had grown concerned about the rapidity that I was getting through gas bottles and it became clear that I had a leak in the new pipework. I commissioned a specialist to re-seal all the unions in Vilamoura but Dave Cooke, who was staying aboard with Linda and friends discovered a serious flaw in the gas locker drain installation which, I imagine is typical of all 135 vessels if they are the same. Basically, the gas locker drain outlet is higher than the bottom of the locker outlet bend so, if it takes in water – which it can when sailing, it will sit in and effectively block the drain. I am currently scratching my head about this and have, in the mean time, adopted a discipline of blowing the water out once moored. The saving (maybe quite literally) grace is that any gas leak will drain into the Lazarette locker which also has a drain. Also the new gas system starts a bilge fan if it detects gas. Unfortunately this is yet another example of Northshore not doing their job properly – I could write a book !

Linda actually escaped an injury when using the boarding steps to climb on board. One of the steps gave way and it was only good luck that prevented a nasty injury. Dave however was not so lucky, two days after his return to Deal he suffered a heart attack and was rushed into hospital. I shudder to think what would have happened a few weeks earlier when the two of us were well off shore in Biscay……….. Thankfully he is now home and recuperating – we wish you a speedy recovery Dave !

Vilamoura is an acquired taste in July and August. It is necessary to ‘get over’ the propensity of the great British public walking around and even sitting down to eat with bare chests. Maybe it is a result of the recent fashion for ‘body art’, after all, if one takes so much pain and expense to adorn oneself, I guess there is a natural pressure to display the result. I may be old fashioned but this is distinctly not my cup of tea so let’s leave it at that in case any of my burgeoning readership has a fondness for self-mutilation.

The Marina is very well served with shops, bars, restaurants, a good chandler and marine services. I am even considering seat and back cushions for the pushpit seats – this crew is spoiled !

So, I will be returning home next Tuesday leaving Paula on board to host the arrival of a couple of her old student friends then it’s back on the 26th to prepare for our departure towards the Canaries.

The regular blogs will resume then.