Ready for the off!

Bob and I attended the ‘skipper’s briefing’ yesterday for the final instructions and we spent the day in a fairly leisurely manner as we are pretty well ‘on top’ of things. This is more than can be said for some of our neighbours who have been rushing around in blind panic all week. What do they say about preparation……………….. now that’s tempting fate! 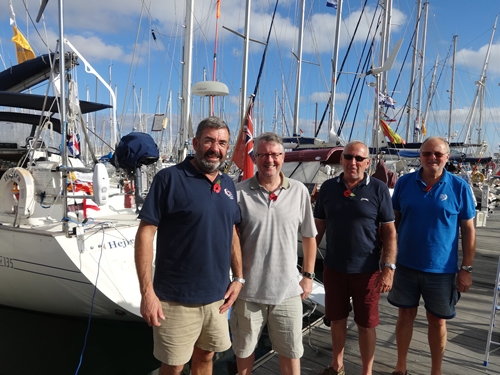 After yet more victualing we are now fully laden with all we need (I hope) The skipper put back the tinned tuna and in voice carrying just a hint of menace said “we won`t need these as we will have fresh tuna Stephen!” The rod and reels are now loaded with 80 lb breaking strain line and some very expensive lures on the advice of the fishing tackle shop (well he would!) so  no pressure!. The atmosphere on the yacht is now of great expectation and we are keen to get going. The yacht is in great shape, as are the crew. Nick returned from the skipper`s briefing with a book titled “Discipline at sea. How to beat your crew into shape” which he said would be good for morale. It amazingly was lost overboard within a few hours.

Don’t want to stop Barry and Bob, they are in polishing mode and Hejira looks great for it!