We experienced a somewhat frustrating day under sail with the wind variable in strength and direction but at least the sea state was diminishing. We maintained our sailplan but resorted to the engine on two occasions, once for an hour and then for a quarter of an hour, it’s difficult to accept speeds of less than 4 knots when those rum punches beckon!

Bob has unfortunately been ‘hors de combat’ having suffered a bang on the knee which has swollen to painful proportions and confined him largely to his bunk. Stephen has written a sick note and is ministering pills and potions in an attempt to have him ambulant for our arrival.

The removal of the hydrogenerator revealed more teeth (?) marks on the unit and I wonder if any reader has experience of what a shark bite actually looks like, do they feature on the internet; can anyone positively identify the damage? 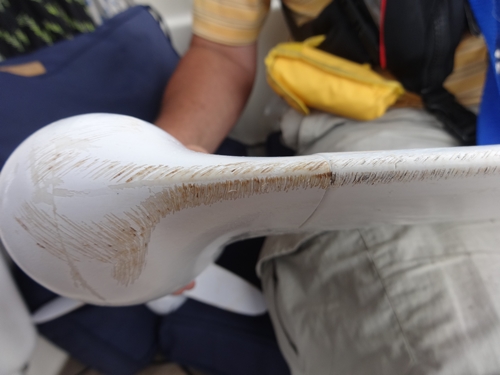 We are beginning to pick up other vessels on the radar as we converge on the northern tip of St. Lucia with 230 miles to go but they seem to be out of AIS range so we are unable to identify them at present. We know we have been exchanging places with ‘Lea’, a Norwegian Bavaria crewed by ladies. They were moored alongside us in Mindelo but we fear that these lighter conditions will favour their more sporty yacht. Interestingly, Dave Cooke, crewmate from Portsmouth to Spain, met the ‘Lea ladies’ in Anglesey in the summer when sailing on a friend’s yacht.

We had another strange ‘happening’ in the evening, the crew were sat in the cockpit and experienced what they described as a ‘metallic clunk’, felt through the seats, which was accompanied by one of the keel lights flashing, had we hit something which kicked the swing keel up and dropped it back down with a clunk?

The only crisis has been an awful smell emanating from the fridge and thankfully, ‘the Doc’ volunteered to investigate the source. It turned out to be a putrid cucumber which must have been left from when Barry and Helen were on board in Lanzarote back in October because we have not purchased a cucumber since then, no wonder it was putrid!

Yesterday’s culinary offerings were driven by the need to use perishable items before we retire to the comforts of a hotel in Rodney Bay as Barry will only be able to eat so much on board on his own. Lunch therefore was a very generous omelette which rather diminished our appetite for the planned evening extravaganza so we reverted to something more basic, sausage, beans and spuds. 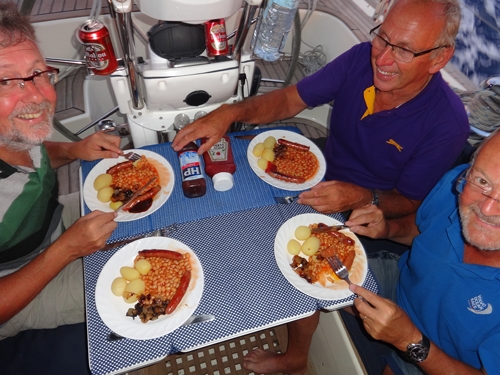 Yesterday was a strange day with no visiting wildlife whatsoever, no takers for the lure so again a 0-0 draw in the fishing. When the Master says “volunteer!” it has a meaning not found in the Oxford English Dictionary which is why I ended up to my elbows in liquefied cucumber.It is a tribute to the patches that I felt not a trace of nausea and I justified the clean up on Public Health grounds. The day had settled into its normal rhythm when the Master insisted we listen to a recording of a radio reconstruction of the Titanic disaster. Dear reader can you think of anything less appropriate? Needless to say we were on iceberg watch for the rest of the day. The evening repast was a nostalgic reminder of home as we enter the home straight. Our proximity to the finishing line was further evidenced by the sighting of some navigation lights off our port beam and a radar `hit’ to starboard although both vessels were not showing on the AIS.

As Bob was invalided out of the night watch by his knee (the Master insisted I wrote him out a sick note!) I had to amuse myself for 4 hours, and squall watching can be quite fascinating. It was odd to note that the squalls that did appear followed our original track but as we had drifted south to follow the wind missed us. One can start to imagine all sorts in the wee hours of the morning but in the cold light of day I am sure they were not out to get us. To help us through the night Bob and I have taken to raiding the Master’s chocolate store of `fun sized bars’ (although the juxtaposition of `Fun sized’ and the Master in the same sentence seems totally incongruous to say the least) so in Bob’s absence I felt it was only right that I eat his share as well. When it was time to raise the Master from the Royal Suite he had insisted on the use of the ‘cable free’ doorbell so I gave it free reign until the bellowed shout of “Enough!” confirmed that the staff had dressed him for his watch.

One swollen knee (improving) and one tennis elbow.

Bob writes (from his bed):-

It is quite interesting to listen to the banter that goes on from the ‘safety’ of your bed.

Whilst the skipper’s accommodation has been cited as ‘apartments’, Barry’s has been identified as ‘the washing machine’! This because there is much agitating movement (of the yacht, not Barry, as far as we know!) accompanied by sounds of rushing water, much as we imagine the inside of a washing machine to be. My cabin has been christened ‘the tip’, since all plastic material that we need to save to get rid of in St. Lucia, as well as the Mines patented vacuum packed rubbish receptacles, finds its way into my cabin, for stowage in the bilge. What members of the crew have not identified with is the ‘stowed in the bilge’ bit and quite often the door is opened and some rubbish or other flung in to the darkest recesses of the tip! You may now see, dear reader, why I say ‘safety’ of my bed. Since last night, two large flattened water bottles have been flung in and I have to report that they made excellent skates as I gingerly descended from my bunk only to slide less than gracefully out of my cabin into Stephen’s bunk! I believe that the Doc thought that I was about to molest him and I have seldom seen him erupt from his pit with quite such speed…….Ussain Bolt, look to your laurels!

Barry is looking forward to some peace and quiet when we all ‘bugger off’.