The wind died progressively through the evening but maintained sufficient strength and angle to keep the main full drawing while Hejira and I motored languidly on the flattening sea. 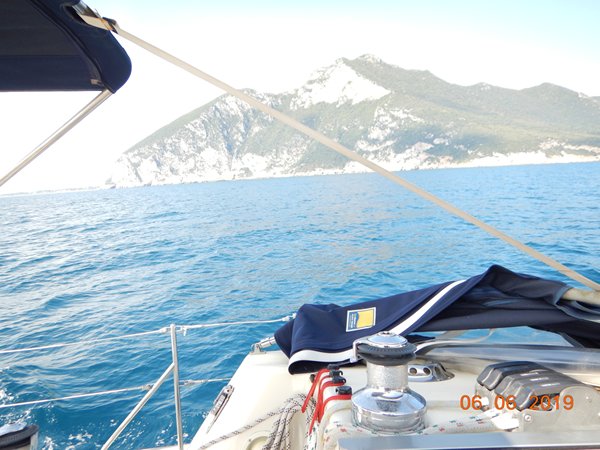 My first night back underway should have been a gentle introduction allowing untroubled 20 minute catnaps in empty open water. In the event, I began crossing the busy Bay of Naples just after midnight and, for the next 4 hours, it was eyes peeled for shipping. In fact, there were only a handful of cruise and container ships that needed to be monitored and none of them passed within half a mile. I took no chances with the alarm and strung it round my neck on a short lanyard so it could’t stray far from my ears. I have to say that I did get some snatches of sleep, waking up in a panic on one occasion having dreamt that I had drilled a hole in the hull under the water line and we were taking on water!

With the breeze turning overnight to the east to blow off the land, it has taken on an earthy smell. I have experienced this in the past and in the right circumstances; you can smell the land well before you see it. 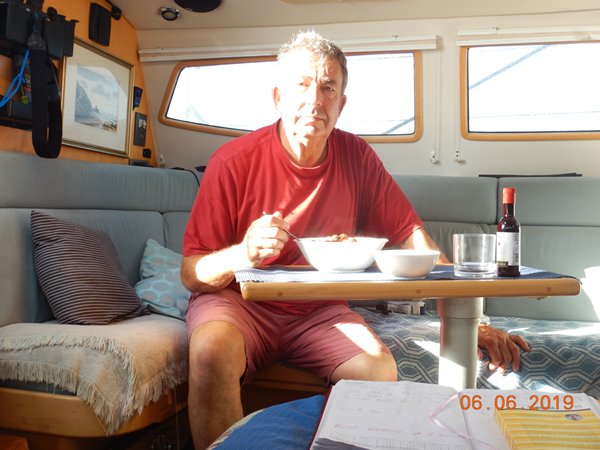 Dawn saw us past Capri and into the ‘twilight zone’ again with no mobile signal. My Iridium Satellite communication system is accessed through the ‘red box’ which provides varying degrees of firewall protection. I have recently upgraded the software and there is a setting which facilitates the use of WhatsApp which seems to work very well and I will be able to send and receive messages from anywhere in the world – one of my messages will be to ask Mailasail how much it is costing! I can also send compressed Emails and make and receive phone calls in an emergency. I will post blogs when out of mobile range using the system with the kind help of our Company IT support man Phil, aka Gandalf. Pictures will have to be added later once back in mobile range.

At 09.15, the wind picked up a little and was free enough to attempt to sail. The silence was magical and I used the time to check the engine oil and belts. Inevitably it seems, sod’s law conspired again and the wind dropped so we were making only 2.9 knots. The sailing experience, under a cloudless sky, on a flat sea, in total silence save for the slap of the waves on the hull was so totally sublime, it made me gasp with joy and want to sing – this is what it is all about and I am gutted that the indulgence has been largely robbed from me with the forced stop and my notional deadline. My original plan incorporated sufficient time to accommodate languid periods under sail but the 3 days lost with the battery saga has consumed the buffer and if I am to attend some meetings and assume my grandparent duties, I will have to press on. With the wind picking up slightly, and achieving 3.9 knots, I hung on to the experience until the wind dropped and headed our course forcing me to reluctantly reach for the engine key.

That’s when my problems really started – or didn’t start because I turned the key, pressed the button and nothing. I could hear a clicking but, particularly being solo, it’s difficult to try the button from the cockpit and test what is happening at the engine. So, tools out and start the diagnosis. When I shorted the terminals on the starter motor, there was a whirring but no engagement. It sounded to me like a problem with the starter motor and I carry a spare. So in the sweltering heat and the heat from the still very hot engine and working in the confined space, I changed the starter motor perspiring like a waterfall, optimistic that this would rectify the problem. Key, button, – nothing. I tried shorting again and just the same whirring. I then started looking at ports which I could reach in daylight sailing at 2 knots and where I could anchor outside to seek assistance. I thought of ‘phoning a friend’ but I had no mobile signal and I couldn’t get through on the Satellite phone. I thought I would just have a final fiddle with the connections on all the terminal blocks and I tried again, nothing, nothing, nothing,  then the engine started – what a result! (I have added this note in September after the passage of time has made my stupidity less embarrassing. It was all my fault, I didn’t need to change the starter motor at all. Having started the engine many hundreds of times in the past, I somehow thought it was started by pressing the stop button. I can only put this down to tiredness and it is a telling example of how judgement is compromised by lack of sleep.)

My dilemma now is, do I press on and just not turn the engine off (I have a week to go) or do I put in and try to get a coherent solution – in a foreign language with an intermittent fault…….? For now I have decided to press on and once I get a mobile signal, I will phone the ever helpful and very engine competent, Atlantic crossing crew mate, Barry Locke-Edmunds and then review my situation.