Would you believe that after my last missive off Cape St. Vincent, as we rounded the corner, the wind picked up and we had a short sail in flat water to cap off our cruise in the nicest possible way.

We filled with diesel (for the nerds in the readership (?), we had used exactly the same as the previous time we filled the tanks, 3.18 litres per hour) and, having checked in, we passed through the opened footbridge into the Marina at Lagos.

Lagos is an excellent location. The marina is large but not vast with lots of space and good dockside facilities. The proximity of the delightful town and beaches is ideal and there is a station with trains to Faro. A number of the yachts were flying ARC flags, Lagos being the final destination of ARC Europe from the US & BVI to Portugal and ARC Portugal from the UK to Portugal. My ARC flag was therefore in good company.

Southerlies are wonderful yachts and Hejira performed exceptionally well on passage south. The generous windows in the saloon are a boon most of the time but with blistering sunshine and 40 degrees forecast, it was time to try the new blinds. 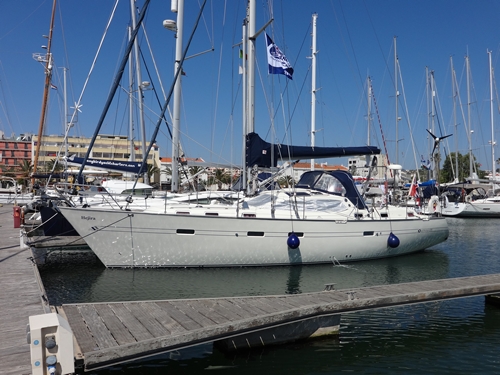 Thanks go to Ivan Bole, ex of Arun sails for the inspiration to fashion these blinds (and a bimini) from material used for conservatory blinds. They successfully reflect the heat while allowing sufficient light to pass so you would not know they are in place – perfect and thanks Ivan! You will see from the two spouts of water in the photograph that I am also running both Air Conditioning systems and this combined with the blinds result in a cool oasis inside Hejira rather than the usual yacht cauldron. 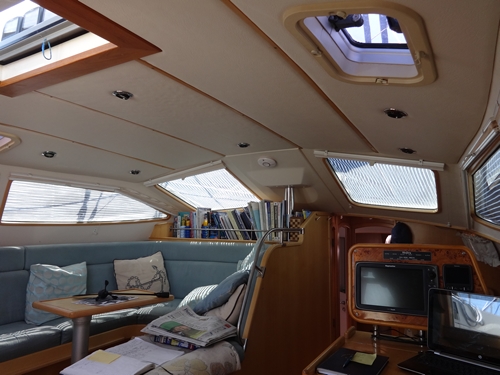 Another improvement not unrelated to Ivan is to the mainsail third reef cringle – Arun made my new jib and main sail fitted with Ronstan luff track ball race cars. These are excellent, strong and low friction but because of their bulk, fewer are fitted than the usual sliders so there are longer spacings of unsupported luff. This can result in some luff vibration even when the tension is right. Ordinarily this would be no more than a mild irritation but, instead of just an eye for the third reef tack as the third reef is too long for single line reefing, Ivan fitted a ring each side with webbing sewn between. This is a good job as if a reef eye is not passed over the ‘rams horn’ correctly it can result in a rip and this has happened to me in the past. The problem that we found was that, if sailing off the wind with a reef tucked in, the chattering luff rattled the ring relentlessly against the mast and in time this would damage the anodising and expose the aluminium mast to corrosion. Our solution was to serve the ring in rubber self-amalgamating tape – simple. 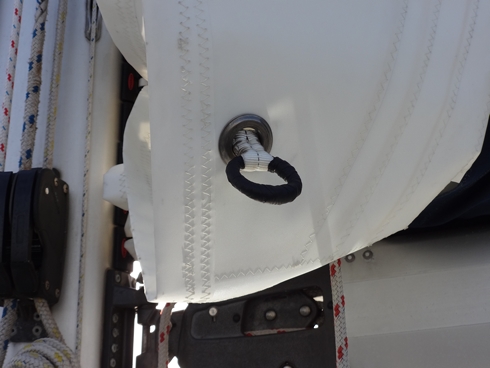 It is true that I did achieve dry bilges, even after a long and choppy passage! Unfortunately, I have recently found water again, even when not running the AC (the condensate drains into the bilge) and this has been a great disappointment. So, checking the water; it was fresh, next question, what has been different over recent days – answer, I have been running the engine extensively. Any other factor – the water from the hot taps is scalding hot after a period under engine. So, I laid tissue paper under the calorifier where I could when running under engine and sure enough it became wet. The calorifier is boxed in but there is an inspection hatch and this revealed evidence of water leakage where the plastic domestic water connections are made off onto the brass valves. There is also a thermostat of the radiator type which was set to the hottest setting. Having turned this down, I am monitoring for water with tissue around the suspect connections and I will report back in due course.

Our delivery cruise to the Algarve logged 1310 miles, visiting Swanage, passing through the Chenal Du Four, Raz de Sein, visiting Loctudy, Houat, Les Sables d’Olonne and Royan in France, Ribadeo, Carino, La Coruna, Estorde, Muros and Bayona in Spain and Viana do Castelo, Porto, Figueira da Foz, Peniche, Cascais, Sines and Lagos in Portugal. The cruise was crewed by Dave Cooke for 835 miles, Mike Watson for 475 miles and Dave Wright, with Mike for 196 miles. We discovered a great deal about Hejira and we have a list of repairs and improvements to be made over the ‘lay over’ in Portugal before another test sailing south to the Canaries at the end of August. This will be the qualifying passage for the ARC crew leading up to the Atlantic crossing in November.

I have enjoyed writing this blog and it has been a welcome diversion on the passages under engine which have been an unfortunate feature of the Iberian west coast.

This will be my last regular missive until I resume in Vilamoura on the 26th of August.

Best wishes to all the readers – if you exist !