The day dawned with sunshine for a change and the breeze holding up sufficiently to sail quite fast for most of the day. As the afternoon progressed, our timings suggested that we might be able to arrive in time to have a celebratory drink in the evening and this became a manic obsession but the loss of wind then plucked this prospect away. The decision to motor for a couple of hours was a ‘no brainer’ and we reverted to the sails for the ARC photos taken from a rib as we ghosted across the finishing line and through the tight entrance channel into Rodney Bay Marina. The tradition of being greeted on the dock by generous rum punches was maintained and I have to say, they were wonderful! 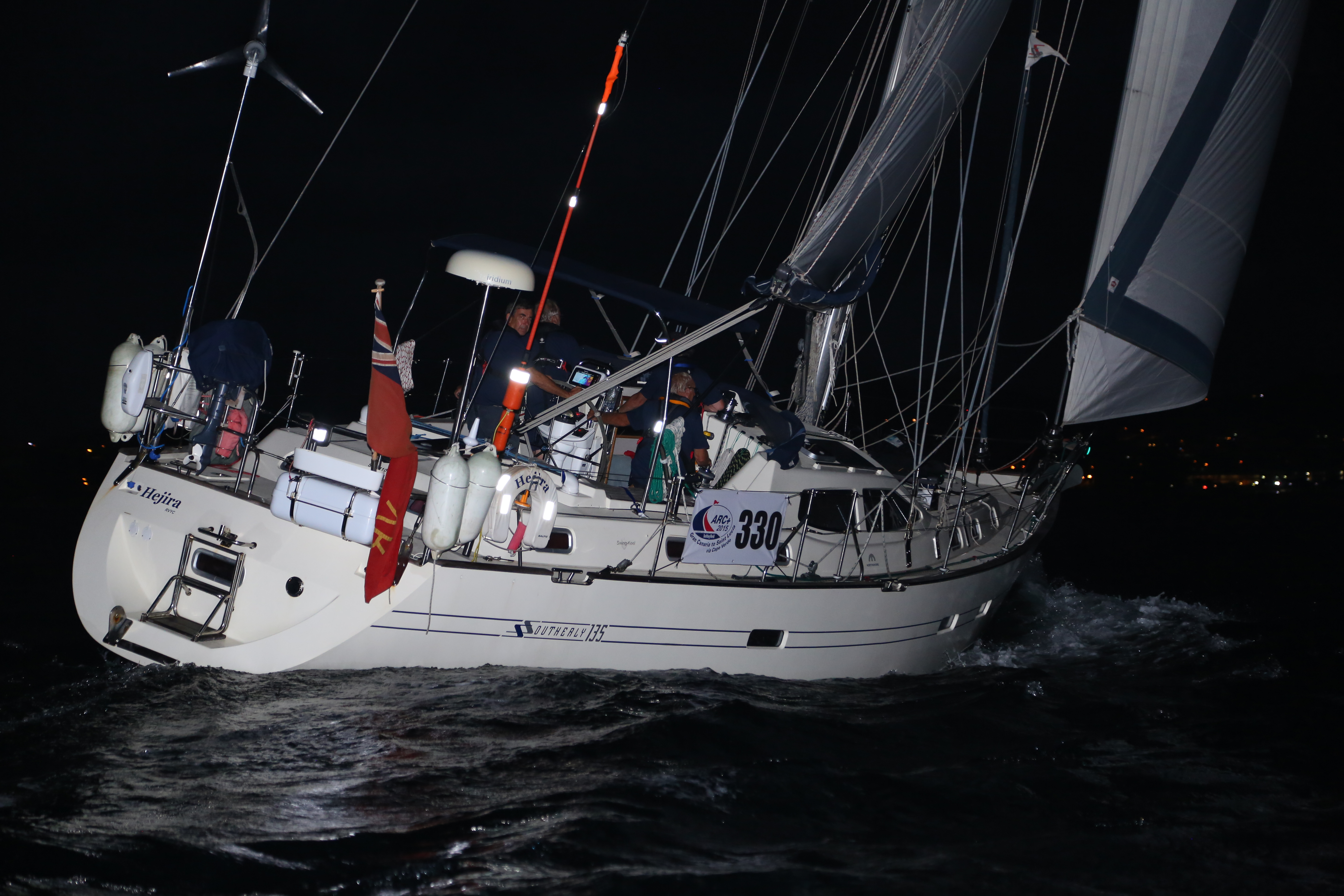 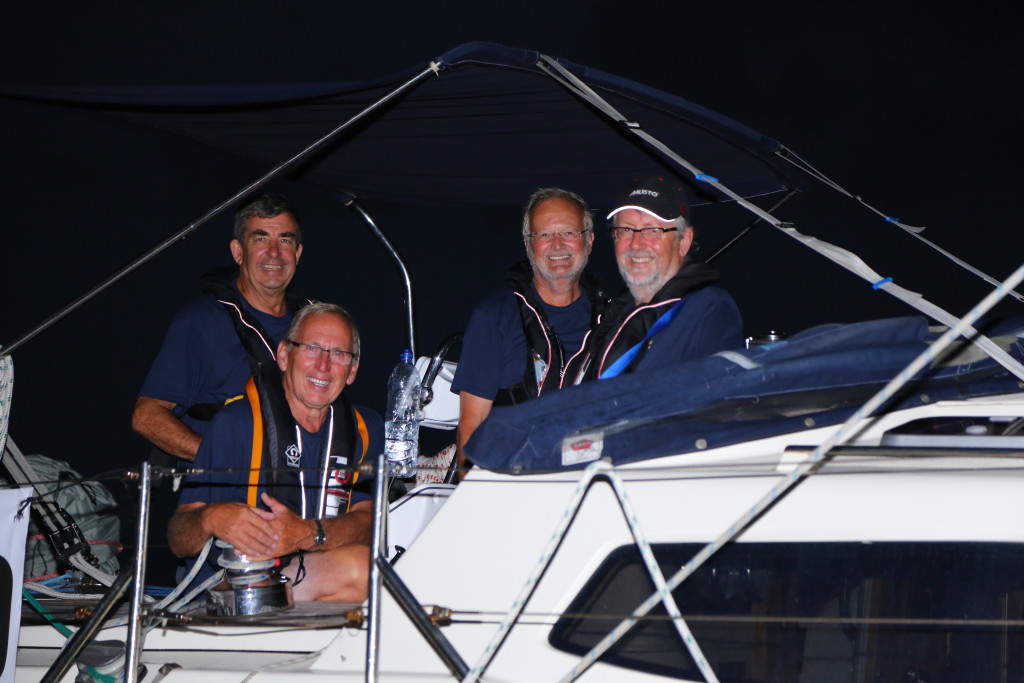 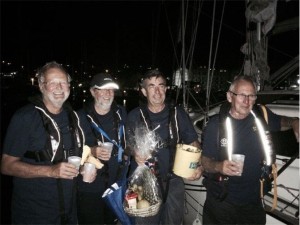 This being the final blog before ‘blogging’ is suspended as we move into the ‘Bay Gardens Beach Hotel’ to await the arrival of our wives; I would like to make a few comments as a retrospect on the adventure to date.

Firstly, I would like to acknowledge the fact the Barry is staying on board while Stephen, Bob and I decant to the luxury of the hotel to join our wives and amazingly, he has prepared a list of repair, maintenance and improvement jobs which he intends to tackle during this period. I am enormously grateful for all the help and support Barry has provided over more than two years while we have been preparing Hejira for the ‘Atlantic challenge’, we work well together and he has been a great sounding board for ideas. Barry treats Hejira as though she is his own and she greatly benefits from his care and attention, as do I.

Bob is the ‘original’ crew member, having joined Hejira in Dover on the 22nd of August 2012 when I completed the purchase having sailed her back from Holland. Bob has shared all my trials, tribulations and frustrations as she was stripped back to undertake the necessary fundamental repairs and improvements that have now left her in such good shape. Bob will remember the frosty early mornings driving down to Itchenor where we seemed to take one step forward and three backwards as the extent of the issues became evident. He was a support when the enormity of the necessary remedial work could have left me sobbing with my head in my hands. For Bob, I know that the Atlantic has been a Holy Grail which, now achieved, will allow him to pursue his own sailing ambitions and he will take a wealth of experience to this next phase, teaching his grandchildren to sail in his own yacht. 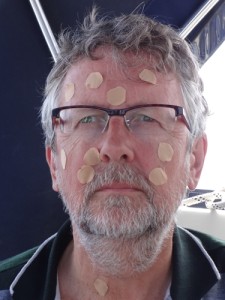 Stephen and his wife Mary have been family friends since our daughters were at the Marist Convent Junior School together. They have sailed with us as a family on two of my previous yachts, going back to my Parker 31 in the Solent. I distinctly remember a week’s supposedly sailing holiday in Barcelona in my Jeanneau 44 which was compromised waiting for a part for the engine. When it finally arrived just before the end, we went out in a bit of a blow and Stephen was sooooo sick. His vulnerability to sea sickness has dogged him ever since and I have to say that I was surprised when first mentioning my Atlantic aspirations at a restaurant meal, he lent over the table in deadly seriousness, holding his hand out for me to shake and promise that he would be in the crew. His sea sickness seems to be under control thanks to the use of ‘patches’ which he also recommended to Bob and seem to ‘do the trick’ for them both. Being a committed doctor, Stephen has equipped Hejira with a multitude of pills and potions and we will all remember him holding an impromptu ‘surgery’ in Arrecife, Lanzarote for fellow sailors who had missed the luxury of consulting a Doctor. Stephen’s enthusiasm and willingness to ‘take things on’ has been a revelation and justified his position in the crew beyond just being the Doc.

I think we can count our adventure a resounding success. We have exceeded our expectation in terms of position, finishing ahead of some yachts which we had no right to beat. The main achievement however has nothing to do with positions which matter not a jot. We have crossed the Atlantic under sail in a small yacht! We have done it all in good humour and accord, it has been a really great crew and we did it together!

Hejira has been a wonderful yacht and has inspired such confidence in her ability to take on all that has been thrown at her. She has never moaned and groaned (flimsy yachts do as they flex) and even in the towering, sometimes breaking swells, she never once ‘slammed’ and just shouldered aside all before her and ploughed on.

The easterly winds of F4-7 were ideal for a downwind crossing but I didn’t expect quite so many squalls or so much cloud, we only had sun for probably 25% of the time. Our sail plans were good with the twin poled out Yankee jibs proving very effective and the prevented main and poled out jib was an adequate ‘fall back’ after the problems with the bow sprit. The Parasailor, whilst a really powerful and stable sail, is not at its best dead downwind and prefers an angle. We didn’t fly it after the bow sprit problem and before that, we flew it only once through the night when the weather seemed sufficiently settled. Our charging regime worked well and a daily running of the generator for hot water topped the batteries up nicely. We finished with a spare full tank of diesel and water. Special mention must go to the auto steering system and the instruments. I had upgraded the whole instrument system earlier in the year to the latest Raymarine kit. The auto drive control is much praised in the yachting press and so it proved. The auto system steered for 90% of the time (I had bought a spare Lewmar Mamba drive unit just in case) and we used it steering to a course, to a track and to a wind angle, all of which it took in its stride, we only took over in the big swells and winds after we resorted to main and jib.

For any aspiring trans-Atlantic skippers, I would recommend maintaining a blog and including everyone in the process. We had great fun poking fun at each other and even if it is not read beyond our family, it was a very positive and morale boosting exercise.

The preparations for this adventure and the ‘shake down’ cruises have dominated the last 3 years. I am very conscious that Paula has been a star in accepting the situation and largely working around it. I think a ‘big holiday’ must be in the offing for the two of us once Hejira is repatriated next summer. I am also only too aware that there is a backlog of outstanding jobs at Thornleigh so, thank you Paula, I will get on with the house and make it all up to you.

‘The time has come, the Master said to talk of many things

Of sheets and cleats and Parasails

Of TRUTH and of Goose wings’

I would like to set the record straight about my shipmates and the privilege it has been to share this adventure with them, I could not have asked for better companions (sorry about the gushing boys). I can only hope I have raised my standing slightly above ballast by now.

Nick (aka Skipper and the ‘Master’) whose meticulous attention to detail has ensured our safe passage in the magnificently prepared Hejira, whose demeanour in the face of incessant ribbing in our daily blogs has been an exemplar of gracious good humour.

Barry (aka ‘The Silver Fox’), whose presence on board has been akin to an insurance taken out with Lloyd’s of London, iron clad and copper bottomed.

Bob ‘I feel the need for speed’ Haywood my companion for the night watches whose gentle tutelage in the ways of wind and sail has been a revelation to this landlubber who if none the wiser is at least better informed.

Hejira…well what can I say? I have never felt safer in any vessel on the sea.

I would also like to give my heartfelt thanks to Mary, my wife, who has supported me all the way in this ‘Boys Own Adventure’. See you Friday.xx

I look forward to renewing my acquaintance with Hejira when she is back in British waters and wish all her crew past, present and future safe passage and fair winds.

How can I possibly add anything meaningful to the skipper’s entry?

I have thoroughly enjoyed my time with Hejira and particularly with the crew. It seems trite to state that we have faced issues together and overcome problems together, but we have. We have taken the mickey out of each other constantly and the camaraderie that has evolved is very strong. It has been a wonderful experience and a dream that few people actually manage to fulfil. I would therefore like to thank Barry, Stephen and especially Nick for being part of my fulfilment. Finally, I would like to thank Alison who, as so many other times in the past, has provided the extremely stable home base from which I have launched several madcap schemes and to which I look forward to returning.

Barry is looking forward to some peace and quiet!

It may be interesting to note that the blog series (as posted on the World Cruising website)covering the Atlantic crossing have won the ‘best blog’ accolade and this has helped to come to terms with the colossal fee for the satellite data transmission !