Light winds persisted through the day which did nothing for our progress and when I turned in we were still struggling to make 5 knots. It was therefore a welcome surprise to rise to a fresh breeze and 8.4 knots on the log. This has brought our predicted arrival time forward, if not into daylight, at least to a time that the bars are likely to still be open!

Stephen scored another success with the rod, landing a Dorado which provided 4 very adequate steaks which were delicious, fried in butter with garlic and chilli. 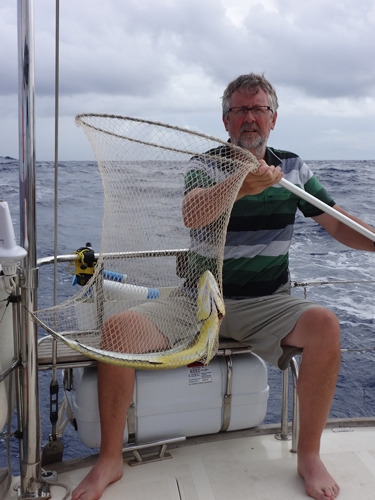 During the slow paced afternoon, I remembered a piece of kit I had made which enabled the mounting of a camera on the telescopic whisker pole. It resulted in an unusual picture of Hejira using this giant ‘selfie stick’. 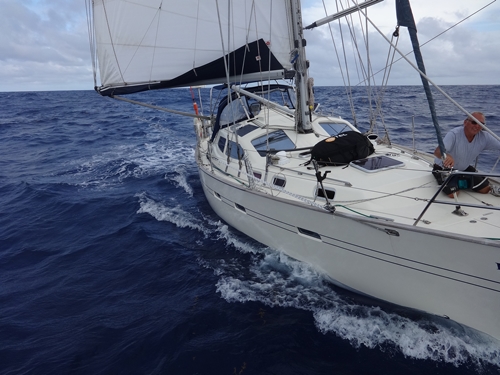 I have noticed a significant change in the demeanour of Stephen and Bob as our arrival approaches, they have certainly become more animated as they count down the miles. For Barry and me the job is not completed and we still have another 3000 miles to go to bring Hejira home to the UK. However, I will allow myself a little glow of satisfaction at the completion of this, the longest leg on the Atlantic circuit. 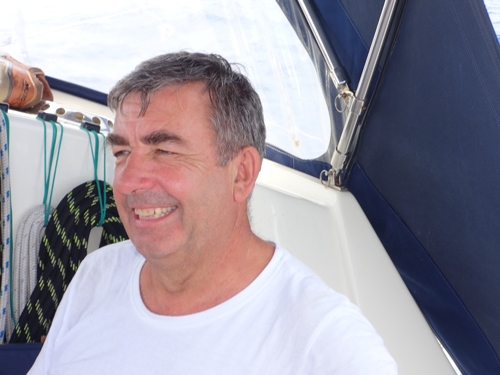 Glad to report that Hejira had a 1-0 victory in the final fishing match and we enjoyed our last Dorado, pan fried in butter, garlic and chilli ,served on a bed of five spice two rice (pretentious …moi?). We then put away the fishing rod and tackle as we will be busy squeezing every last Nano knot out of Hejira in the dash for the line. We believe we were visited by a Wandering Albatross (Diomedia exulans) in the morning, a truly beautiful sight. The late afternoon saw us treated to a display of spectacular flying and diving by a Northern Gannet and then for the icing on the cake, dusk saw the appearance of a Magnificent Frigatebird .

The Master`s mood has improved so much that we were able to capture an image of him smiling (see above). A picture whose rarity will give it added value at auction. We also noted a significant decrease in the frequency of the ‘bellowing’ so expect the crew`s tinnitus to improve from now on.

Bob and I spent a companionable watch together (probably our last on this passage) putting the world to rights whilst being harassed by squalls, but Bob`s fine sailing skills allowed us to slide by without getting soaked and Hejira romped onwards at 7-8 knots. It was soon time to rouse the Master from the Royal Apartments so dispensing with the doorbell a loud `Ogy Ogy Ogy!` produced the desired effect and he shot out of bed like a breaching whale. Even that rude awakening did not dampen his mood so we were dismissed to our berths with only trivial use of the lash.

The crews various aliments are improving so hopefully they will be all fit enough to enjoy the delights of St. Lucia.

Last night’s sail during the night watch was superb! We were sailing Hejira to maximise position and speed, using the almost constant stream of squalls to spin us off into the next one. Really good fun and some significant speeds attained.

As this is the penultimate blog, I feel that it is time to acquaint the dear reader with some of the less savoury traditions that endure on Hejira. I feel that I need to do this as a form of catharsis. Besides, tomorrow’s blog may give me a chance to apologise, if I have to!

The dear reader may recognise that Stephen and I are probably the less reverend contributors to the blog. This is probably because we are the less competent members and at the receiving end of most the skipper’s handy hints and tips on how to sail, delivered at maximum volume with much invective, even to the point of split expletives!

The skipper maintains discipline much along the lines that Captain Bligh adopted in the past. (I think that the skipper secretly models himself on Antony Hopkins portrayal). Stephen and I have decided to include the photograph of a crew member’s back (name withheld to protect from further retribution). The miscreant was guilty of nothing more than catching insufficient fish!!!! This form of punishment continues on Hejira, as part of its rich tradition. 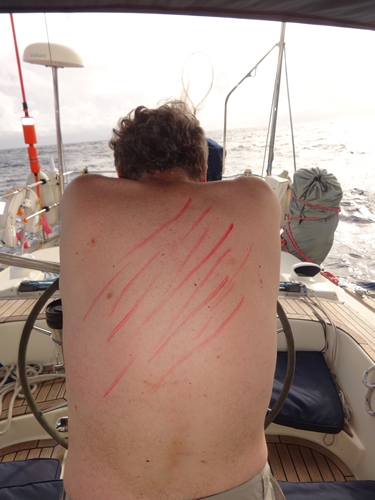 Past Hejira tradition also involved the skipper and his errant anatomy. The skipper’s favourite attire used to be a pair of shorts, Tilley Endurables. These were extraordinarily hard wearing items with the one significant failure…….they could not contain all of the skipper’s anatomy! As a consequence of this, it was an everyday occurrence for one or other of the skipper’s rollocks to make an appearance! Although the crew got used to this, it came as quite a shock to visiting females, or maybe that’s why they visited?

I had thought that this particular tradition had died a death when the Tilley Endurables finally departed. However, imagine my joy when the skipper sat on the aft deck in his new shorts, and, sure enough, there was the same offending rollock on show!

All of which indicates that tradition dies hard on Hejira!

Barry is looking forward to a night not spent on rinse cycle in the ‘washing machine’.