When I bought my ‘used’ 135, I commissioned Northshore to carry out some work which I felt would benefit from the epithet ‘Installed by the original builders’ should I come to sell the vessel in the future.

Other elements of the Northshore work certainly warrant dedicated articles but my recent Atlantic circuit has prompted this entry regarding the watermaker installation.

With extended cruising aspirations, a watermaker seemed an essential part of the picture and the low output Katadyn 40E was recommended. This made sense as with the planned electrical generation regime, the watermaker could be left running in the background for long periods without taxing the batteries. On the face of it, the installation looked neat and professional.

Because once commissioned, regular ‘pickling’ would be necessary; the watermaker was not tested until heading south for the Canaries. The unit worked perfectly in the marina but failed to produce any desalinated water once underway. This conundrum was the subject of Email exchanges with Jim at Mactra, the agents for Katadyn who was very helpful and supportive, particularly as they had not supplied Northshore as it was a ‘grey import’. Changing the pipework, repositioning the filter in a lower location, repeated bleeding and flushing failed to rectify the problem. It was only a series of progressive elimination tests, culminating in supplying sea water direct from a bucket in the cockpit, that drinking water was eventually produced. The problem was clearly the watermaker sea-cock somehow admitting air so that the pressure on the membrane was compromised (pneumatic instead of hydraulic) but the prospect of filling buckets and holding them in the cockpit for the small quantities of fresh water produced was not practical so we had to think of a better way. Inspiration dawned while on a ‘stop over’ in Mindelo in the Cape Verde Islands. We extended the intake pipework and fed it down the keel box slot beyond the hull with a fishing weight attached to the end. This Heath Robinson ‘lash up’ worked perfectly on the 2000 mile passage to the Caribbean and allowed liberal showering which was welcomed by all.

Our analysis suggested that the tiny bubbles that always run along the hull on passage were the root of the problem. In the small quantities normally experienced, the watermaker can deal with their very minor influence as the pressure is overwhelmingly hydraulic. The sea cock that had been installed however, although of good quality bronze with a strainer, was totally inappropriate.

When underway, the tiny bubbles collected in the top of the strainer and progressively compounded into a large bubble which was trapped until the yacht heeled when it was released into the supply pipework and formed against the membrane preventing the seawater from reaching sufficient pressure to pass through. 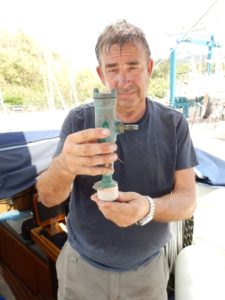 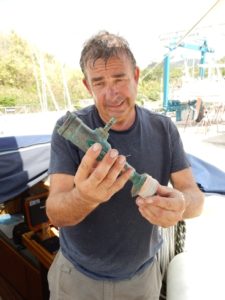 Jim at Mactra recommended that the watermaker intake should be spaced away from the hull and forward facing but could not recommend any proprietary fitting. Additionally, because of the unique drying out abilities of the Southerly, any protrusion on the underside of the hull would be vulnerable to damage .

The solution turned out to be the modification of a log impeller through hull so that it could be withdrawn when the watermaker was not in use (the watermaker is only used on long Ocean passages)and replaced with the flush blanking ‘plug’.

The strainer sea cock was re-utilised for a new sea water pump inlet under the galley sink which, in the event, all but rendered the watermaker unnecessary!