There were crowds lining the docks and breakwaters waving us off with a cacophony of hooters as the fleet left the marina for the start. 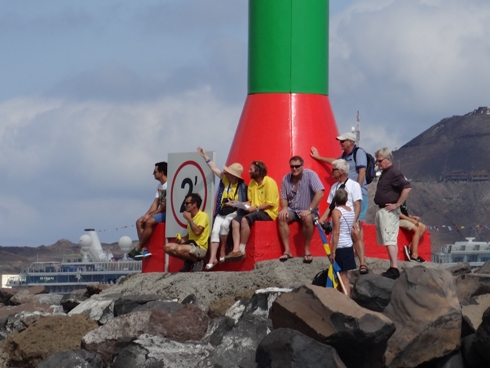 We ‘played safe’ and crossed the start line a minute late, conscious that a false start would cost us 3 hours added to our time. 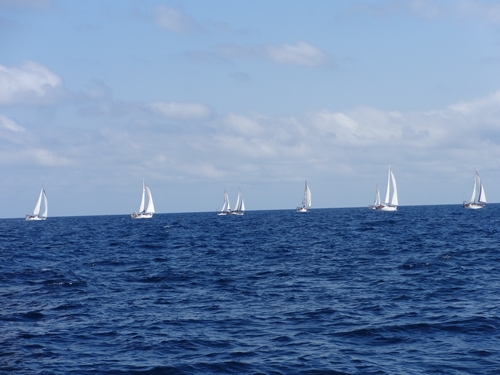 The wind was a little light for Hejira but, we resisted the temptation of flying the Parasailor at this stage as we only have the one and the acceleration zones to the SE of the island are notorious for ‘blowing them out’ as the wind can increase to gale force in a matter of seconds. On the basis that we have 6 days or more to go to Mindelo, we thought it prudent to bide our time until we reach the more consistent winds clear of the islands.

With the wind freshening, Hejira soon ‘picked up her skirts’ and we were broad reaching at 7-8 knots in a lively F6 as night approached.

It was not long before the fleet was dispersed across the horizon with only a couple of yachts within sight, one of which was ‘Raylah’, an Island Packet 420 which has an almost identical handicap to Hejira. We had met the ‘Packet boys’ on our pontoon in Las Palmas and had a light hearted informal beer resting on our relative positions at the finish in Mindelo. One of their crew, Richard lives in Camberley, used to go to the Nags Head in Sunningdale (next to my office and 100m from my house) as a youngster and his daughter is a patient in Stephen’s practice – incredible!

Over the radio, we have heard of several yachts retiring with equipment issues. Touching wood, our only failure so far is the pressure cooker which needs such a lot of boiling to start the pressurisation, the bottom layer of our chicken and pulse casserole was burnt – the rest of it was delicious.

Our night watch system seems to work well with Barry taking the first, Stephen and Bob doing the middle watch together with me taking over for the last watch until dawn when we change from the conservative overnight sail plan to the more ‘bullish’ arrangement during the day with all hands on deck although this morning, we will continue with one reef in the main.

The sight of 60 yachts jockeying for position before the start was one that will stay with me for a long time. The fleet soon started to separate due to speed and course and by night fall only 2 other boats were visible. Bob spotted a black fin in the water and we saw a mother with her young, cross under us, I believe they were Atlantic spotted dolphins but who knows. The seas have been a bit `lumpy` at times but so far (touch wood) I have not had to reacquaint myself with my friend the rubber bucket due to the wonders of the `patch` behind my right ear. The first watch is now completed without any problems and the night sky was magnificent with stars and the Milky Way visible in all its splendour. I managed to raid the chocolate hoard near the skipper’s chart table so Bob and I enjoyed a bit of a `choc fest’. As I am typing this we are being visited by some young dolphins (?Clymene) who are enjoying our bow wave.

The night watch went well and we awoke to another lumpy sea with freshening breeze. No Parasailor deployment as yet with the wind on the beam driving us well. Chores around the boat will keep us occupied whilst we proceed to Mindelo. The only incident of note as far as I am concerned was when the upper bunk bolts worked loose and the lee cloth failed in its duty and I was suddenly on the cabin floor! No harm done as I fell on a full sail bag! We may see Isaac get the lines out today and we will keep you posted on any successes!