Today we mourn the departure of a trusty friend, taken in its prime, lost overboard after years of loyal service. No one saw the departure but a suicidal leap into the deep is the only explanation for the missing winch handle. It leaves behind a twin sister in the cockpit and a smaller brother at the mast, adoption attempts will be made for twins in a chandlery upon arrival in St. Lucia so the survivor can retire to back-up status. 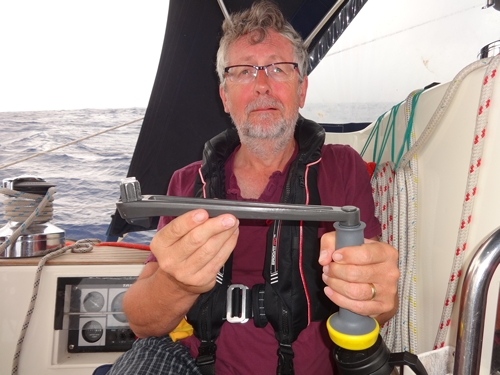 The winds became light around noon but by 15.30, the approach of squalls with big winds and shifts made it prudent to drop the Parasailor after 28 hours of great sailing and revert to the safe twin poled out Yankees. It is during this period with bundles of ‘string’ everywhere that we think the winch handle made its bid for freedom.

Our 24 hour run was 149 nautical miles but we have to remember that the 164 recorded yesterday was actually flattered by the additional hour gained through the time zone adjustment.

The conundrum of how the fleet ‘got away’ to such an extent continues to vex me and it will be interesting to quiz the other skippers as to what streams they experienced on passage. We seem to have suffered periods of adverse current which appears to be diminishing as we head north and west. It is probable that by heading south as we did, we suffered while those taking the rhumb line took advantage of more favourable conditions.

Anyway, onto more positive things and something that would benefit all Ocean sailors and may even be of interest to the ARC organisers as a part of their helpful briefings and guidance notes. During the course of an Ocean passage, all yachts generate a quantity of plastic waste, mostly from food packaging. Super-yachts have bulky compactor plants which are not practical on a family size yacht and I don’t know how they deal with the inevitable smell as time takes its course. My solution to the problem is to place the rubbish in a vacuum bag normally designed for clothing or bedding (cheap on Amazon) and suck the contents down using a simple adapter to a battery vacuum cleaner thus reducing the size and sealing the smelly contents – simple and very effective. The bag can then be placed in the bilge until suitable disposal facilities are found. 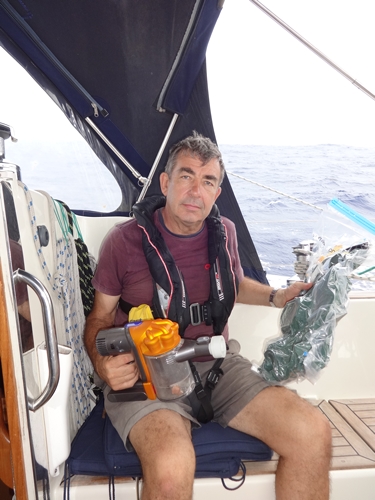 We have suffered squalls through the night with great banks of rain showing on the radar. When they hit with the instant increase in wind speed and direction instability, the only option is to hand steer, reacting more quickly than the auto to maintain the course and prevent a broach or flogging sails.

The day started well with our usual rhythm of activities. The Master was in a benign mood and the crew went about our business. We had the yellow fined tuna for lunch (20minutes at 200c in the oven) and very tasty it was too . 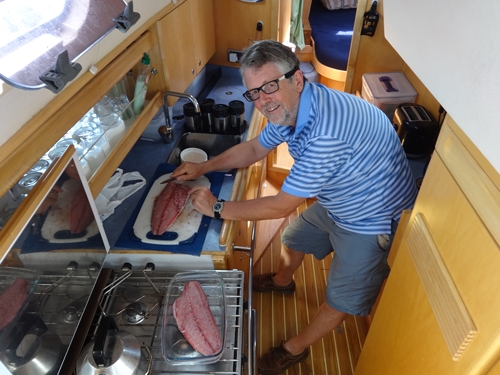 We then decided that we would give the fishing a miss today to preserve the ocean stocks. Once the winds started to get up the Master announced that we were going to change the rig so he and I went forward to take on a stroppy Parasailor two poles and two yankees . I am glad to report a victory for the Brits in this engagement .We were visited by some Black Legged Kittiwakes (Risa Tridactyla) and an Artic Tern(Sterna paradisaea) but otherwise we were the only wildlife on view. After an early evening snack of cheese and  onion toasties we settled down to see `The Bounty’ (Mel Gibson and Anthony Hopkins version) and I can assure you that the idea of putting the Master in a dinghy and setting him adrift never crossed our minds. The night was very lively with squall after squall chasing us on the radar and I am now coming to dread those purple patches on the screen, and as I type this I can see a whole gang on an interception course for us. It is a relief for a landlubber like me to have experienced sailors as crew mates.

A few muscle sprains and one case of conjunctivitis.

All in all, a wretched night with little sleep due to very lumpy sea conditions. 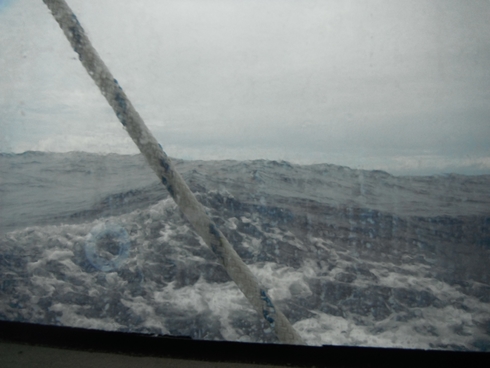 It seems that flying fish have identified me as a target. Further to the incident of one disappearing up the leg of my shorts, on getting out of my bunk just before midnight last night, I noticed that another was lying on the floor of my cabin! Heaven knows how it got there as I had only the small overhead ventilator and side window open. Ho-hum.

Today we are braced for more rain showers and, I imagine, a severe interrogation by Captain Bligh with regard to the missing winch handle. The crew has noted a slight change in persona as far as the skipper is concerned, probably matching the change in his facial hair style. For some time he has sported a look that was entirely redolent of Captains Bligh or Pugwash, but his most recent style reminds us more of a shortish Austrian chap who upset quite few people in the mid-20th century. Blog entries may be curtailed tomorrow if the interrogation follows the line that we suspect it might!

Barry had a busy night and is still asleep.