End of the Earth (Finisterre)

Peter Hoade had crewed from the Azores back to the UK in 2016 and is one of the four of us on this next leg. He had recently moved to the western edge of Dartmoor and kindly met Dave and I in Plymouth driving us to spend an enjoyable afternoon and overnight in his delightfully quaint cottage in Mary Tavy. We managed to victual on our way back to dropping Dave at the train station and, finding a pub showing the Premier rugby final, we gave the details to Ollie and Stephen and they met us there by taxi from the station. A Chinese take away and an early night prepared us for the 5am dawn start on Sunday morning.

We managed a decent sail before the wind died away and a motor through the night delivered us to the top of the Chenal du Four just as the tide turned in our favour. Transiting that and the Raz de Sein in double quick time with a spring ‘flush’ under us we set our course for Finistere across Biscay. Monday was glorious with clear skies and the Parasailor pushing us across in the most satisfying and comfortable fashion – ‘it don’t get much better than that’ ! 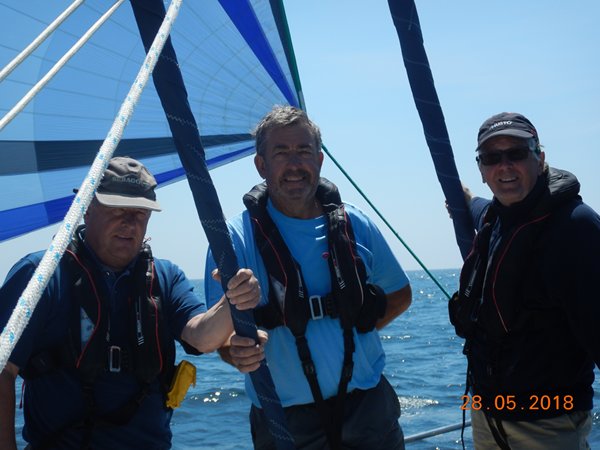 When told that the sail measures 140 square metres, Ollie ruefully commented that it’s much bigger than his flat. Part of the ‘mission’ for this passage was to re-commission the ocean passage gear not used since 2016. I am pleased to report that the wind generator, Watt and Sea hydro-generator and the water maker all worked perfectly. The Iridium satellite system, however, is still causing me grief. There is a new Firewall setting which allows the sending of Whatsapp messages and it was my understanding that this was a very cost efficient way of communicating. In view of my eye watering bill (over £6,000 in one afternoon!!!) I had set a low cut-off threshold and it would appear that I have already breached that after only 3 days as the system has stopped working and the lights suggest ‘system unavailable’ ! The predicament has probably not been helped by my wife sending holiday photos and friends sending greetings by video.

With the wind due to veer and increase to the point of a potential gybe, we chose to run through the night with jib and light engine assistance and, as expected dawn brought rain and overcast skies. Tuesday was also a good sailing day but with the tighter angle, full plain sail was the order of the day. We had a good sail through Tuesday night until the wind headed us and we chose to pinch under engine.

Peter is banned from writing as he has not been forgiven for inadvertently deleting my final heartfelt musings in 2016 before they were published. He is serving time ! So here are Stephen and Ollie’s offerings:-

Greetings to our reader, I have now recovered from the Mal de mare that mugs me on the first few days of a passage despite ‘the precious patches’ that helped me cross the pond in 2015 .Weather (sic) my sense of humour was deposited in my friend the rubber bucket I will leave to you to decide. The skipper has yet to metamorphose into “The Master” so there is no sign at present of the cat’o’nine tails despite it being brought into the conversation last evening by ‘he who should not be named’. Yesterday’s sailing was great and the parasailor was magnificent even when we had to wrestle it back into ‘le sac’ .Ollie and Peter have proved themselves as chefs and it will be my turn tonight. I am hoping to be able to serve up fresh fish even though yesterday the Bay of Biscay swallowed 3 lures with ease much to the amusement of the crew. 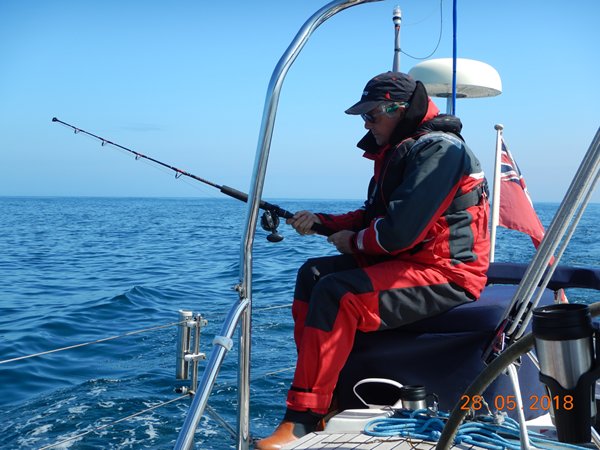 The pressure to land a catch is exacerbated by the ‘use by’ date on our fresh spinach  with which Ollie ‘Popeye’ Mines is strangely obsessed, so watch this space. We will be trolling with a squid lure even though it’s speeding through the water at 8 knots might confuse our potential  supper into thinking that it is dealing with ‘Super Squid’’ which is best not to antagonise. Bye for now dear reader I will update you tomorrow on ‘The Three Body Problem’ of Fish, Squid and Spinach.

And hello from me.

First of all, may I say what an honour it is to be contributing to this august publication once again, with its multitudinous readership.

It’s the beginning of my third night watch. And whereas last night I had a 50 mile-wide J.M.W Turner painting to stare at, tonight there’s no sunset to speak of – so this is a welcome distraction.

With their advancing years, my shipmates start slurring their words, blinking in slow motion, and lolling their heads back with fatigue after 8pm; so happily there were no challengers for what I consider ‘a jackpot slot’ of the dinnertime till 2am watch.

Though the weather today was a marathon of grey drizzle, the sailing’s been marvellous. If we carry on like this, we’ll get to Portugal having produced barely a few fervent farts’ worth of carbon emissions. And to the seasoned seaman, it may seem like an obvious point, but there’s something uniquely satisfying about travelling great distances using only the forces of nature.

Perhaps less satisfying, is the business of drawing upon nature for fresh sustenance. Stormin’ Stephen has bravely shaken off his early wrestling with the sick bucket – and that means he’s been able to focus almost all his attention on fishing.

At the end of last week, I sent a shopping list to the skipper, which had everything I would need to cook my signature dishes on passage. One of which was Salmon En Croute. I arrived to find all the ingredients in the fridge…except the salmon. The rationale for this was that “We’re bound catch something that we can ‘en croute’”

Well, so far the culinary options have been:

‘Strand of Seaweed Like a Brown Liquorice Bootlace En Croute’

Fishing is all about patience, and we have two weeks after all. So why all the fuss? Well, as Stephen mentions above, the Salmon En Croute recipe requires spinach. And like a biological hourglass: the spinach of time is slowly turning to mush.

That’s not to say we haven’t had some interest from the fauna of the English Channel and the Bay of Biscay: every so often we hear a sonorous twang from the fishing line, and a dejected “Bugger” from Stephen. Another lure gone. In fact, I’m starting to wonder whether the community beneath us have got themselves a pair of wire cutters, and are using them to gleefully take the piss out of us.

Steve Williams was once heard to say,

While crossing the Bay of Biscay

“I feel perfectly sure

That a shark took that lure;

And the bastard is swimming away!” 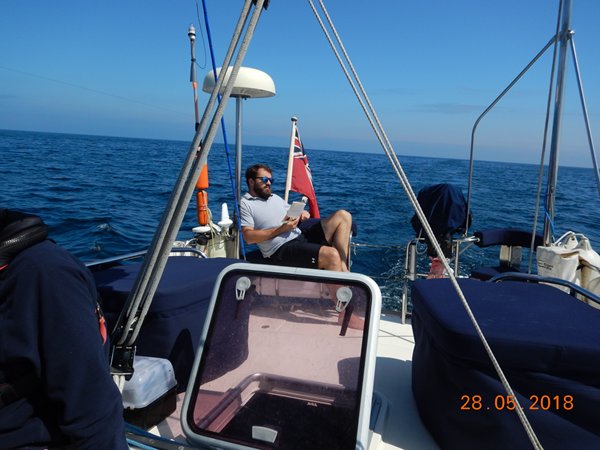