John Morris having arrived by train from Birmingham, the Mulberry pub in Conwy marina provided us with an excellent meal before returning to Hejira to watch the spirited England football performance against Italy in the World Cup.

Our dilemma for tackling the Menai Straights was that, with big spring tides, and not being able to leave Conwy marina until the sill dropped at half tide, we would have to plug a strong current and arrive late at the Swellies. 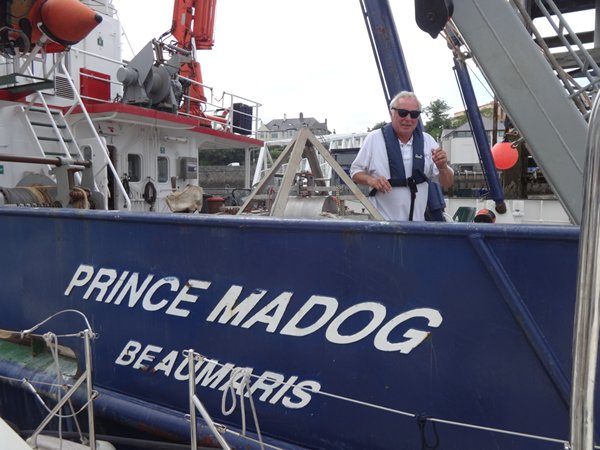 Calling the Menai Harbour Master, an alternative plan evolved. We could leave Conwy after the foul tide and only plug the lesser current in the straights up to the Menai Bridge and rather than pick up one of the buoys, take up his suggestion of mooring alongside the Bangor University research vessel Prince Madog. 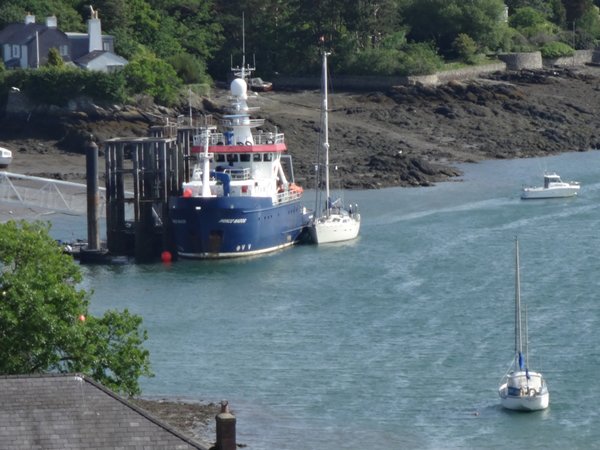 Our fateful berth alongside the Prince Madog.

He pointed out that we could then walk ashore and be in the perfect position to take the Swellies the next day. In hindsight, his recommendation was probably prompted more for the ease of collecting the £17 berthing fee than from the safety of the berth.  The passage from Conwy to Menai was straightforward and we did walk ashore for a beer and an excellent curry. We took advantage of our enforced wait the next morning to review the Swellies from the Bridge and I managed to get a haircut and beard trim for £7! 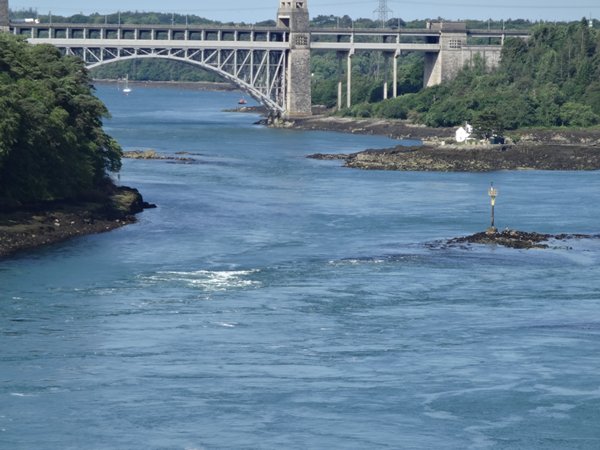 Disaster struck while we were preparing for our passage. A large motor boat had passed  through the straights against the tide at full bore and, unnoticed by us, had thrown up a huge wake which picked us up and dashed us against the hull of the Prince Madoc, right into its steel strake which had been well above our gunwale. The gelcoat has been slightly damaged and the teak gunwale topping has taken a whack. Very, very annoying and the incident overshadowed what would otherwise have been a very pleasant stop over.

The actual passage through the two bridges and the treacherous rocks between was taken at slack high water and the timing is extremely critical. Four other yachts negotiated it with us within the optimum five minute period, one of them, having arrived early, just held station until the timing was right. 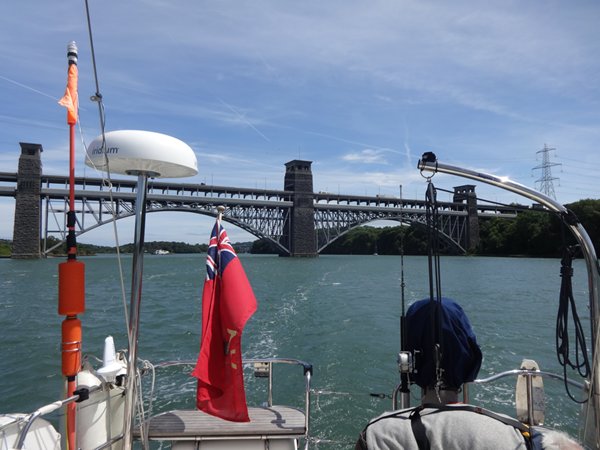 Breathing a sigh of relief, the remainder of the Straights were more open and picturesque with Llanidan House and Caernarvon Castle particularly notable. The Caernarvon Bar was a challenge however as the channel has moved over the winter and the plotter course was completely different. Confusion was avoided by referring to the survey chart picked up in Conwy, just as well as the Bar is shallow even if you are in the middle of the channel at half tide.

Intending to sail through the night towards Swansea, we were blessed with a Northerly F4/5 and we made the most of our Parasailor which we carried until nightfall, making great speed and enjoying flying this superb sail innovation. Quite by chance, we saw an identical (but smaller) Parasailor in the distance on a Moody 36 called ‘Pearl’ out of Conwy and caught her up. 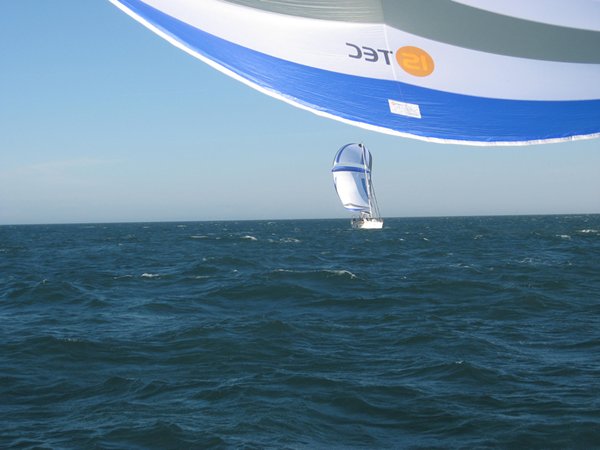 We agreed to share photos and I have attached one of their pictures. 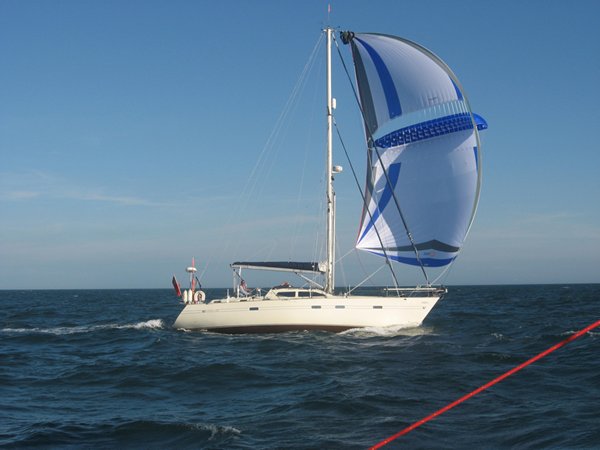 Flying across the Irish Sea under the Parasailor.

The Parasailor is a derivative of a traditional spinnaker but it differs in several ways which make a huge difference to the cruising yachtsman, particularly in the ease of handling. In the middle of the sail is an opening across the width and in the middle of this opening is a wing which inflates with the wind which is focussed through it. The wing gives lift and stability, keeping the sail open and full while the slot vents gusts making it more tolerant of variable conditions. It is also flown without the spinnaker pole which also simplifies the process and with the guys led through blocks on the stub bowsprit, it avoids conflict with guard wires. The Parasailor is manufactured by a German company, Istec which make parachutes and wings for paragliders so it is built to the highest aeronautical standards. Anyway, we carried the sail for over 6 hours achieving speeds between 8 and 10 knots and we only reluctantly dropped it at dusk. It was some of the best sailing of the cruise so far. The 175 nautical mile passage from Menai to Swansea took only 24 hours and the average speed of over 7 knots was very pleasing.

We locked through the Tawe sea lock into the Swansea basin and then through onto an allocated berth in the marina. Once again there were depth constraints and it would not have been possible with a traditional keel yacht of our size.  I had left messages for my eldest brother Alan who lives in Porthcawl, giving him updates of our progress, hoping he would join us, but heard nothing. This turned out to be because he had been on holiday abroad. He called when we arrived in Swansea and he and his wife joined us in a lounge on the 28th floor of a high rise with views over the beach and marina. 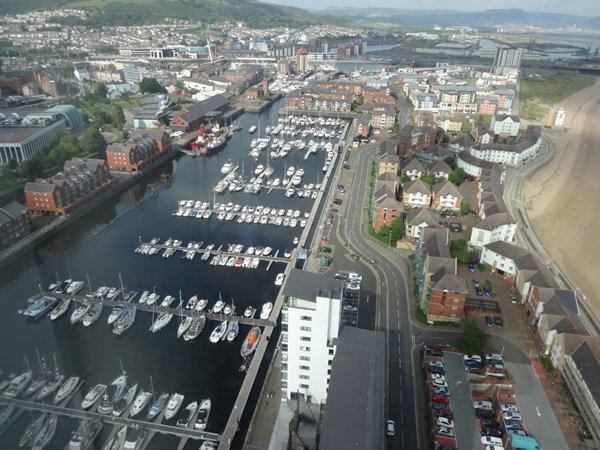 Swansea from the high rise restaurant. 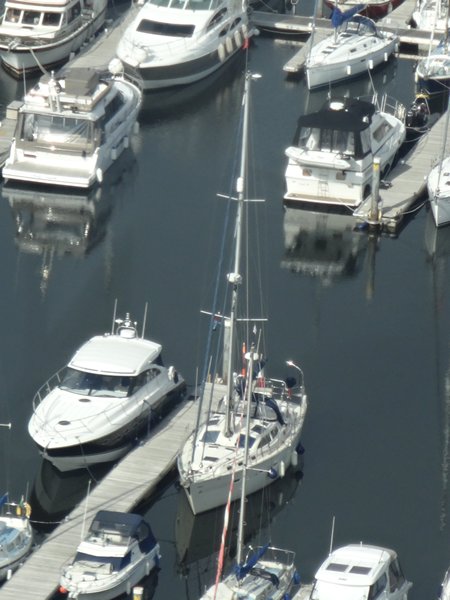 After a meal on board, Jenny left for home and, the next morning we departed on the first lock out for our passage to Cardiff. 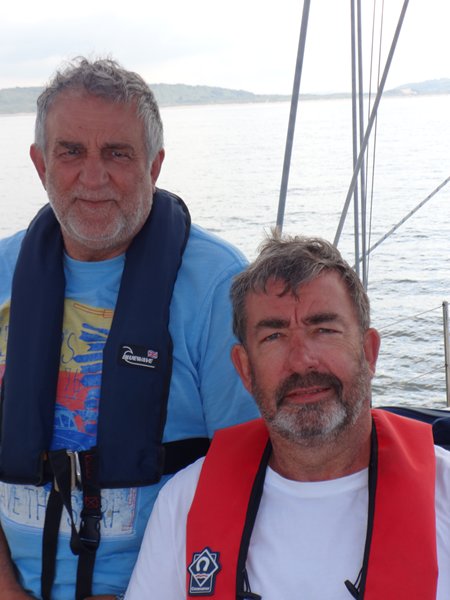 My eldest brother Alan and me

Cardiff Bay has an under used pontoon facility right outside the Welsh Assembly building and it operates on a ‘pay and display’ basis. We were the only yacht moored there overnight, having bought a ‘parking ticket’ for 18 hours and we could not understand why it was not more popular. 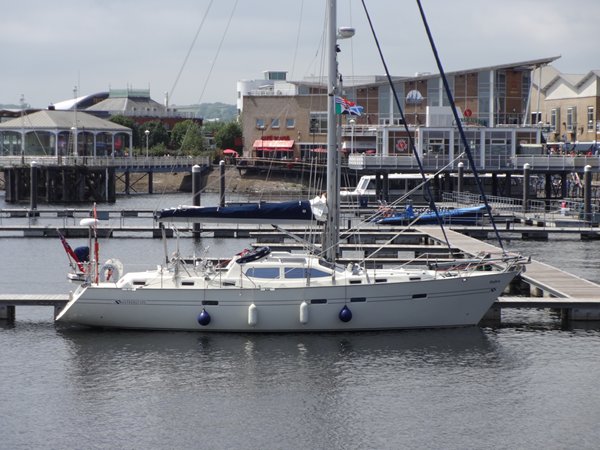 Cardiff pay and display outside the Assembly Building

It did not have electricity or water but it was a mooring in the centre of Cardiff.

Locking out of Cardiff bay (the sea lock has a huge range) just after low water, we gently carried a favourable tide up to Avonmouth and entered the river up to Bristol as the tide approached high water. 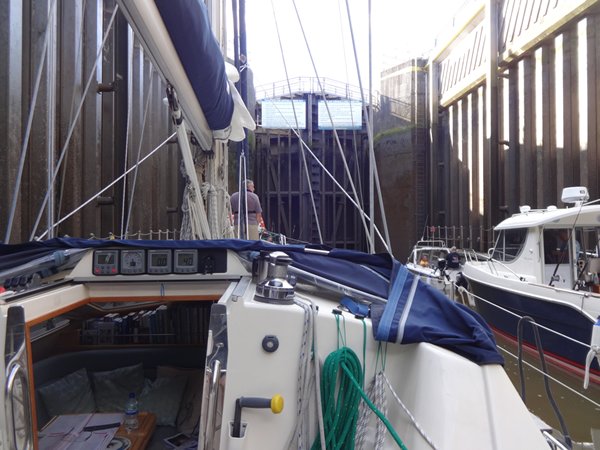 Mooring in the centre of Bristol was reminiscent of the 12 very enjoyable years we spent in Port Vell in the heart of Barcelona. 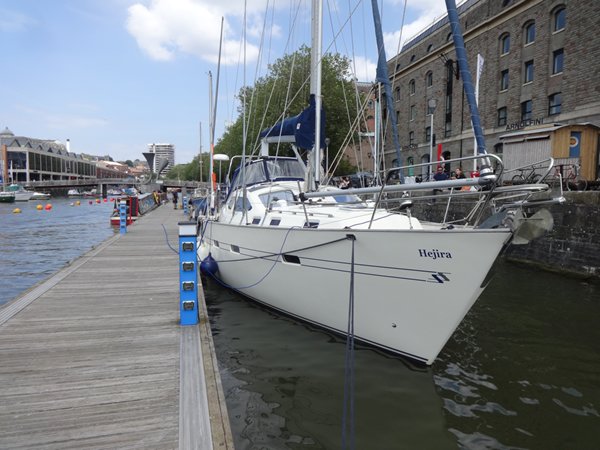 Like in Barcelona, there was a square adjacent to our pontoon where there was a succession of musicians (some better than others) taking to a small stage to entertain the gathered crowds. Bristol does however seem to be a mecca for rowdy stag parties and some  continue noisily into the early hours. 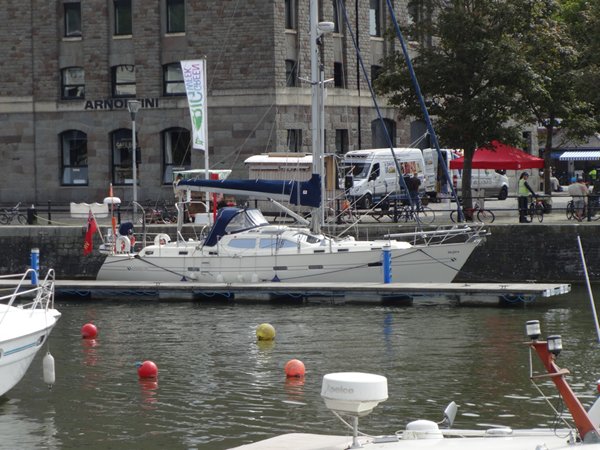 Bristol berth in the heart of the city

It was 4am before quietness descended. The visit to SS Great Britain was hugely enjoyable. We, as a Nation, seem to do nostalgia very well, this experience followed the equally enjoyable visits to Titanic in Belfast and Britannia in Edinburgh. 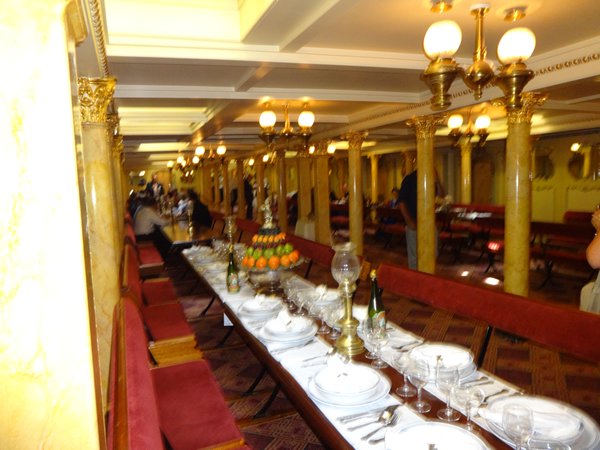