Cliff Crummey joined the ARC Europe to take his Elan Impression 444 AWOL to the Mediterranean, having also sailed across with the 2015 ARC. On the westward crossing he had been joined by his wife, eldest son and brother. However, work commitments meant his crew could not do the eastbound trip, so Crummey joined the ARC online crew list and began to search for replacements. 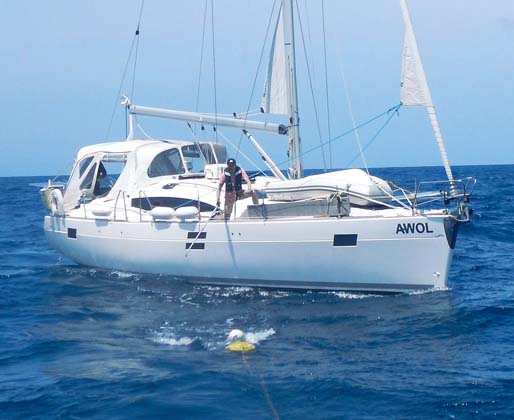 “I made some good connections and got it down to about six people, all Yachtmasters or really well qualified,” he recalls. “Unfortunately I had numerous people drop out at the last minute. One guy even paid for his flights and then decided that he didn’t want to come.”

Crummey’s wife jumped on a flight back to the BVI and they completed the first stage together, before his crew search resumed. He interviewed one sailor and, having reassured himself of his experience levels, signed him up. With his new crew’s flight landing just a day before departure, the duo set out having never sailed together previously.

“It was quite breezy and we knew there was a low coming in that would catch us, so we all went quite south initially, then tacked and came north,” recalls Crummey. “Then overnight on that first night the autopilot decided to pack in.”

The difference between perception and reality of experience levels became obvious immediately, as Crummey’s co-crew struggled to hold a course on AWOL in the 30-knot winds and 4m seas. Crummey took the wheel for 12 hours to ride out the worst of the conditions.

Crummey was considering whether to retire, but the thought of heading back alone, into a following low, was equally daunting. “Do you do another 1,000 miles, or go back to Bermuda? It would have been pretty devastating if we had gone back, but I think, if we’d still been on our own, that would have been the only choice.”

Fortunately, he spotted fellow ARC entrant Hejira on AIS. “I knew Nick [Mines, owner] anyway, so I contacted him and he very kindly agreed to escort us across.” The two crossed almost the entire way in company, with AWOL staying within a couple of miles of their lead boat during the day, and within half a mile after dark. 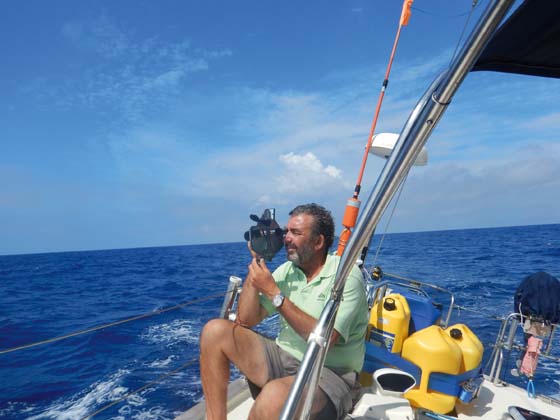 Nick Mines aboard Hejira, his Southerly 135. Nick sailed within sight of another boat to help them stay on course for over 1000 miles.

“At night-time to assist us, because my crew found it very difficult to sail at night by the instruments, we put Nick in front of us with his anchor light on and his stern light on – so he could look and steer. We did that every night, which worked a treat.”

The pair adopted a two hours on, two hours off watch pattern, as they hand-steered across the Atlantic in Hejira’s wake. Crummey initially slept on deck, then left a fog-horn next to the helm so he could be awakened if help was needed on deck. Fortunately they had predominately light winds for ten days, giving Crummey a chance to retro-fit his previous autopilot, which worked for several days to earn the pair some respite.

However, Mines and Crummey had realised that the same low pressure system that caught Slipper was approaching, and decided to motor rapidly towards the Azores. The crew on Hejira transferred 100lt of fuel to AWOL to allow Crummey to motor without constraint, and both boats arrived safely before the severe winds struck.

If ever you were to find yourself relying on another yacht mid-Atlantic, Nick Mines and Hejira are exactly the sort of skipper and boat you would want to find. His Southerly 135 has been lovingly modified and prepared for all eventualities, including back-up systems galore with solar panels, wind generator and Watt & Sea hydrogenerators for recharging, and what Mines concedes are “spares of spares”.

Even though Mines admits that sailing in company with AWOL did compromise their crossing, he says he wouldn’t hesitate to do it again. “It was ten days, the majority of our trip. But they were very grateful and they got here safely, and you wouldn’t want that on your conscience otherwise.”

One thought on “Blush”