We are now a Southerly yacht both by make and position. We have maintained our twin jib sailplan and tracked dead downwind which has taken us well south of the rhumb line to become one of the most southerly of all the yachts. The wind is gusting top end strength for the Parasailor and we don’t want to damage it at this stage and the main and jib would force us north. Our pace ain’t bad in the variable wind strength with our last 24 hour run at 152 nautical miles which is an average of over 6.25 knots. We may also find ourselves in different wind conditions and, if it goes light as it’s supposed to, we will have a better angle to accelerate the wind under the Parasailor. Anyway, doing the same as everyone else won’t beat them after our conservative first night so we might as well ‘take a punt’.

It was a sticky day with cloud cover but the crew were all in good spirits after a better nights’ sleep. 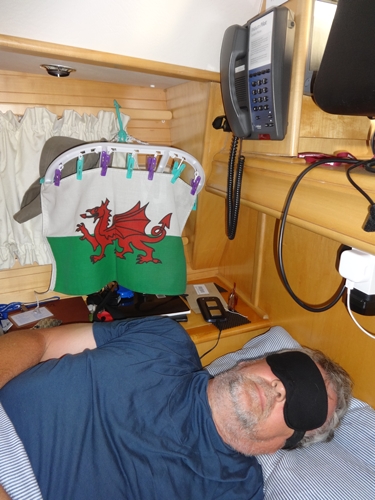 Stephen in his little piece of ‘God’s Country’.

The water maker performed well all day and kept up with the demand of showers for everyone and several washings up. We now need to drink all the bottled water we shipped as a contingency to lighten our load.

Stephen had a frustrating day with the rod with several that ‘got away’, he had better luck at chess though, reprieving his Welsh rivalry with Barry and going two one up in the series. 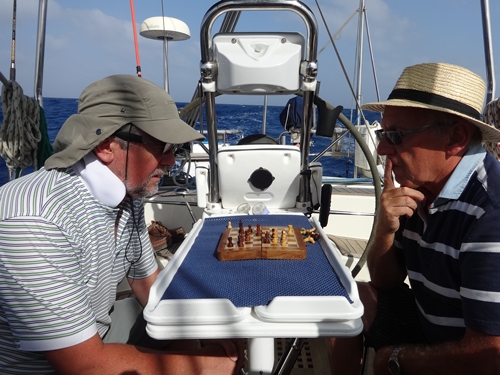 Our eating habits seem to have settled into a pattern. When everyone emerges in the morning, we have muesli (known on board as parrot food after Stephen jokingly mis-translated the name) with long life milk and a nutty, dried fruit topping. Mid-morning we have an Emergen-C which is a fizzy orange drink made by Pfizer which is who Becky (my daughter) works for in Dublin (miss her) and is supposed to contain all the vitamins and stuff needed to maintain a healthy balance. 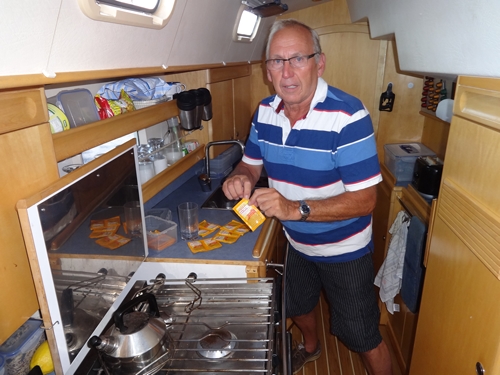 We make it with diet tonic (intended to go with gin but our passage has been pretty abstemious thus far) made using our soda stream. We time the running of the generator (not strictly required for charging with all our other inputs but short of running the main engine, the only way to get hot water via the immersion heater) for lunch time so we can make toast using the long life sliced bread bought in Mindelo. 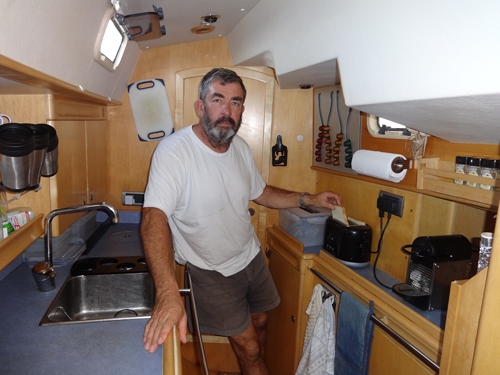 Toast while the generator is running.

We tend to have a cheese and onion toasted sandwich. We have an early evening meal in the cockpit before it gets dark, taking it in turns to cook. The only similarity is that all recipes seem to start with onion and garlic. Bob cooked a tuna pasta bake last night and Stephen has promised something exotic tonight using the chicken pieces bought in Mindelo.

Unfortunately no visiting dolphins today and only one single seabird which we have struggled to identify. Opinion being divided between the Black-Capped Petrel (pterodroma hasitata) or the Black Browed Albatross (Thalassarche melanopiris), twitchers we are not. The fish were biting then being uniformly uncooperative in their behaviour subsequently, the score was Hejira 0 Fish 3 so as you can guess that last night’s delicious tuna bake came from a can. The Master is pleased with our progress and now allows us the privilege of cleaning the deck on our knees instead of on our stomachs ,and also the bliss of a shower(under strict stop watch time keeping in case we go over the 30 second allocation and are banished to the foredeck with a wet wipe) Most of last night`s watch was spent chasing down the moon on the silver track it laid before us but before we humbly asked the Master to take over it had dropped below the horizon so he was left with only the stars for company.

Crew remain in rude health and the Master is The Master.

I have not a lot to add as the routine that is necessary sets in and we go about our days and nights, almost in ‘automatic’. We seem to be able to keep the boat tidy enough for Blyghus Maximus’s liking and routine maintenance tasks are keeping on top of all the systems that we have. We even seem to have time for a short session of television in the evenings now, between the main evening meal and the first watch (the Silver Fox). Barry remains stoic about his ‘old trouble’ and we hear no complaints. The remainder of the crew are wary of approaching the Doc for any ailment, this following our watching his gut the solitary catch so far and his propensity to reach for the biggest knife available given any opportunity!