Big winds, but what direction

The Parasailor had provided us with good speed and distance but as the afternoon gave way to the evening, the wind backed and strengthened to what we now consider to be the limit for carrying the monster sail on a reach of 20kts true. Reverting to reefed white sails, we were able to bear up and resume a more direct course while maintaining a respectable speed. By midnight the wind had fallen away so we dropped the main when we changed watch and continued under engine alone. As the night wore on, the wind built again and we were able to maintain 7kts under the jib alone. By 6am, the wind was up to Gale Force 8 and we steadily shed more sail without diminishing our speed. 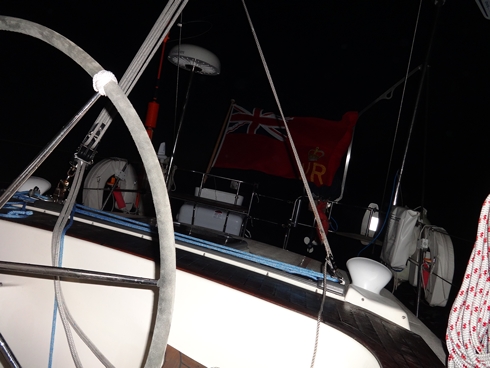 By this stage the seas were big but as we were in a depth of over 4000m, they were large swells rather than the more menacing shorter seas of shallower waters. This wind on the quarter with big swells rolling under the hull is the most challenging task for the auto pilot and, in order to maintain anything like a steady course, it necessitates steering left and right through almost 180 degrees. I am very happy to report that the equipment coped very well and this is something of a vindication of the expense to completely upgrade the instruments and the pilot control system. 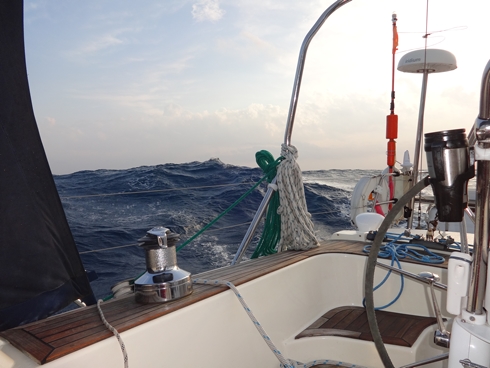 The instrumentation story is not an entirely a happy one however.

On passage from Houat to Les Sables d’Olonne, the wind direction indication started showing complete rubbish, nothing like the actual wind direction. We become quite reliant on the information on our instruments and, although we have a traditional ‘windex’ at the top of the mast, it doesn’t help at night. The loss of our eye level display needed sorting. We tried re-booting (as you do) to no avail so when we left Les Sables in the morning we tried to re-calibrate. This involves motoring slowly in circles until the system says the process is complete. We must have done half a dozen 360’s and still one segment would not ‘colour in’ as completed. All the circuits managed to do was furl the burgee at the top of the mast around its staff which is how it stayed until the wind died away yesterday.

Before losing phone signal offshore, it seemed prudent to call Sean at Greenham Regis who supplied and installed the new instruments. His measured analysis was that ‘it is probably f____d’ and asked me to bring the mast head wind vane/ anemometer unit  back with me and he would replace it. So it looks as though yours truly will be shinning up the mast before I catch my plane back from Portugal on the 30th.

With the wind forecast to drop away today, we fully expect to have to motor for a period. This will at least give us the opportunity to sort a few things out – and have a shower!